For several weeks in May, it seemed as though the coronavirus was finally ebbing: National case counts, which rose astronomically earlier in the spring, had leveled off. States had started the process of reopening.

Now, cases are rising again, prompting fears that a second wave has hit the U.S.

NBC News reached out to several experts who study patterns of disease. All agreed: No, this isn't a second wave.

A second wave of the coronavirus suggests that the first wave has come and gone. That hasn't happened.

"We never made it out of the first wave," said Dr. David Weber, medical director of hospital epidemiology at the University of North Carolina Medical Center in Chapel Hill.

What Is A Wave?

Weber likened waves of infectious disease to ocean waves. "When you're 10 feet up on the shore and the wave hits you, it recedes all the way back," he said. "Now you're on dry land with no puddle beneath."

"Flattening the curve" — that is, stopping the rise of the number of new daily cases and causing it to level off but not necessarily go down — is important because it gives health care systems a chance to spread out resources so they don't get overwhelmed. That's where the U.S. is overall — sitting atop a plateau of new daily cases — as businesses begin to reopen.

"A second wave implies that the first wave has disappeared and reappeared," said Loren Lipworth, an epidemiologist at Vanderbilt University Medical Center. "I don't think that is what we're seeing here in the U.S."

Instead, the U.S. appears to be going through a constant chain of smaller spikes. Lipworth referred to them as "waves of infection" rather than one big, cresting wave that has come and gone.

While cases have significantly decreased in the hardest-hit states, New York and New Jersey, they're increasing in states like Arkansas, Arizona, and South Carolina.

Those states "didn't have much disease activity early in the pandemic but are now seeing an upswing," said Caitlin Rivers, an epidemiologist at the Johns Hopkins Center for Health Security. In other words, their first waves are just beginning.

Another way to consider whether an area has gotten through the first wave of an infectious disease is to look at levels of community spread, or transmissions of the virus that can't be traced to a source.

It's only when areas can get through one to two weeks without community spread, Weber said, that they would qualify as having passed that first wave. Indeed, community spread is still occurring across much of the country.

COVID-19 In the Fall

It's possible that the current plateau will stay on the same course over the summer, without decreasing significantly, and then spike even more this fall as schools reopen and the annual flu season begins. That's not necessarily a "second wave" but an even bigger rise on top of the current series of smaller crests.

"There is a possibility that we will see a resurgence in the fall," Rivers said. "But there's a lot of open questions, because we've never seen this virus before."

Scientists can base predictions only on past pandemics, such as the 1918 influenza pandemic.

The first wave of that infection was in July, when influenza viruses generally don't transmit well because of higher temperatures and because people generally spend more time outdoors.

That wave largely subsided during August and September, but cases spiked significantly in October and November 1918 in a second wave. The return of the illness was largely blamed on authorities' downplaying the significance of the virus and allowing large public gatherings to continue, particularly in Philadelphia.

As a result, 12,000 people died in Philadelphia. In contrast, immediate social distancing in St. Louis resulted in just 1,700 deaths.

Indeed, the potential for a bigger surge of COVID-19 will also depend on the actions of people. Unlike the actual ocean, there are ways to slow the waves of the virus or at least minimize its risks. 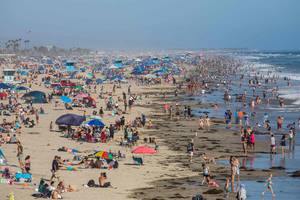 Addressing Health Care Disparities for Black Women with Breast Cancer
UP NEXT...
The Financial Burden of Cancer: Report from the American Cancer Society
CME