Thirty-six percent of U.S. employees say their employer requires all workers without a medical exception to be vaccinated against COVID-19, a new Gallup Poll found.

The latest results are up from nine percent from the same poll in July and have shown a steady increase since then. Additionally, 39 percent of workers say they are encouraged but not required to be vaccinated, decreasing from 62 percent in July.

Gallup noted that 25 percent said their employer had not specified a vaccine policy, which has stayed relatively unchanged since May.

A majority of U.S. employees say they support the establishment of a vaccine mandate, with 56 percent in favor and 37 percent opposed. The percentage in favor is up 7 points from 49 percent in May. The percentage of those opposed has stayed relatively the same since May.

Gallup also polled whether employees would be more likely to leave their jobs due to a vaccine policy that does not match their personal preferences.

Forty-five percent of U.S. workers said they strongly favor employee vaccine requirements, with 33 percent of that group [15 percent of all U.S. workers] saying they are "extremely likely" to look for a new job over disagreements about vaccine policy.

Gallup's poll was conducted Oct. 18-24 among 4,007 adults and has a margin of error of plus or minus 2 percentage points. 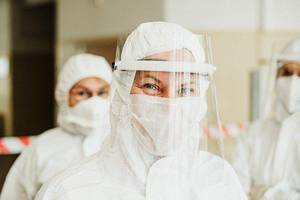