Most mental health care in America doesn’t happen in psychiatrists’ offices – especially when it comes to children, teens and young adults.

Instead, young people with depression, anxiety and more turn to the same people they already go to for all kinds of other health issues: their pediatricians, family doctors, school-based clinics and other primary care providers.

But where do those providers turn when they need more help in handling the mental health concerns of their patients – especially more serious issues that they’re not trained to handle?

If they’re anywhere in Michigan, they can turn to the team at MC3.

More than 16,000 times since 2012, MC3’s psychiatrists and pediatric behavior specialists from the University of Michigan have connected directly with more than 1,800 primary care providers by phone, for consultations about their patients.

Together, they’ve mapped out plans for handling ADHD in young children, suicide-prevention safety planning for teens and symptoms that might signal schizophrenia in young adults.

There’s no charge to providers or their patients, thanks to the program’s funding from state and federal grants.

For providers whose patients recently had a mental health emergency or are waiting for an appointment with a child psychiatrist or a psychiatric inpatient bed, the service can literally be a lifeline: one in five of the consults involve a patient who has expressed suicidal thoughts or harmed themselves. 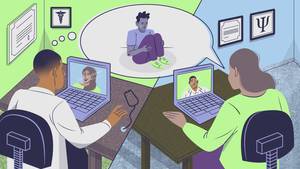 Closing the Time Gap with LDCT Screening: A Preventative Screening Technique for Lung Cancer
UP NEXT...
Cervical Cancer Screening: The Latest Research on the Impact of Different Cytology Methods
CME