Multiple sclerosis (MS) is a debilitating disease in which the body’s own immune system attacks itself and can, over time, permanently destroy the protective sheaths, or myelin, around nerve fibers in the brain. Myelin insulates nerve cells and facilitates the transmission of messages along them. When the myelin sheath is damaged, the nerves themselves may become damaged, and patients experience a wide range of symptoms, including pain and fatigue, loss of vision, trouble walking, and in the most severe cases, loss of basic functions. Current therapies attempt to treat the disease by preventing or decreasing the frequency and intensity of autoimmune attacks, and by managing symptoms, but these treatments can’t repair the damage already done, and they often ultimately fail to prevent disease progression.

Research from Whitehead Institute Fellow Olivia Corradin and her laboratory provides new insights into the genetic risk factors and disease pathways that contribute to MS, and could eventually lead to new therapies for the disease. The findings appear in the journal Cell on dateTK in a paper co-first authored by Corradin lab researcher Anna Barbeau and Daniel Factor, currently a senior scientist at Convelo Therapeutics. The researchers investigated disease-associated DNA sequence changes called genetic variants—slight differences in the same DNA sequence that vary from person to person --that are risk factors for MS, meaning that people with those variants are more likely to develop the disease. Their key discovery was that immune cells are not the only cell types implicated in the development of MS; rather, genetic variants that affect cells in the central nervous system also appear to contribute to the disease, including variants that cause dysregulation in oligodendrocytes, the brain cells that produce myelin.

“The idea that only genetic variants that affect your immune system are important in MS always struck me as incongruous with the way that the brain is so impacted,” Corradin says. “Although the disease is primarily autoimmune, it makes sense that some aspect would be intrinsic to the brain.”

Researchers had already identified many variants as risk factors for MS, but they had not identified how each specific variant actually contributes to the disease. Corradin’s team discovered the role of oligodendrocytes using an approach she developed for analyzing large sets of genetic risk factors that allows her to narrow in on the cell type or types in which each variant acts. Previous strategies for analyzing this sort of data looked at patterns across the full set of variants, and so were effective at determining the dominant cell type implicated, but not at making one-to-one connections between a specific variant and the cell type through which it confers disease risk.

Corradin’s approach, which she calls the outside variant approach, examines each MS risk variant within its three-dimensional context in the nucleus, where DNA folds into shapes that place certain DNA sequences close together, even if they are not adjacent on the chromosome. Corradin identified outside variants, regulatory sequences of DNA that share the same 3D space with the risk variant and target the same gene, and when she found that an MS risk variant and its outside variant neighbors increased MS risk as a group above the level of risk conferred by the original variant alone, she could then look for the cell type in which all of the variants were active, and predict that they contributed to the disease due to an effect on that cell type. The researchers then further investigated to confirm the findings.

In the case of MS, the dominant cell types implicated in the disease are immune T and B cells, and indeed, the researchers’ analysis found that most of the variants affected these cell types. However, the investigation also provided the first evidence, to the authors’ knowledge, that some MS risk variants instead affect oligodendrocytes—demonstrating the outside variant approach’s capacity to identify cell types that have been overlooked due to another cell type having a more prominent role in the disease.

After identifying which genetic variants affect oligodendrocytes, Corradin’s team investigated the specific aspects of oligodendrocyte biology that go awry, in collaboration with oligodendrocyte biology expert Paul Tesar’s laboratory at Case Western Reserve University School of Medicine. They found that the variants contributed to disease risk by disrupting gene transcription in immature oligodendrocytes. Some of the variants prevent the molecule that transcribes DNA into RNA from completing its job by keeping it stuck in a programmed pause state that cells use to orchestrate the timing of gene transcription. This disruption may keep the cells from maturing and producing replacement myelin for that depleted through autoimmune attack. This finding may provide a new potential avenue for MS therapies: enabling quicker, more effective oligodendrocyte growth and myelin repair.

Corradin and her team hope to use the outside variant approach to analyze other complex diseases that, like MS, occur due to combinations of many genetic and environmental factors, and may arise from slightly different combinations in different patients. Analyzing complex diseases, like cancer, heart disease, or psychiatric diseases, in this way could provide a more thorough understanding of their underpinnings.

“With complex diseases, there is a huge amount of variation among patients, in terms of both genetics and disease progression, and the same treatment is not equally effective for every patient,” Barbeau says. “Our approach can lend insight into developing novel therapeutics that might benefit people who don't respond well to existing treatments.” 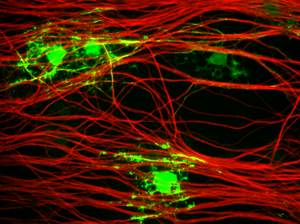