In the three months since Dashauna Ballard of Tuscaloosa, Alabama, recovered from the coronavirus, she has learned to not mention that she was ever sick. Some people give her suspicious looks when they find out she had COVID-19; some assume she got it because she did not take proper hygiene measures; and, recently, an acquaintance from church implied that Ballard, 29, caught the virus as punishment for sins she committed.

“People act like you did something to catch it, or you did something wrong, and that’s why you got it,” Ballard, an academic accommodations specialist for university students, said. “I feel like I have a scarlet letter on my chest.”

In a time when they need it the most, many survivors of the coronavirus are finding that their support system wants nothing to do with them. Having recovered from the illness, they now face a new challenge: stigma from family, friends, and co-workers.

At the height of her illness, Ballard struggled with shortness of breath so severe, it briefly landed her in a hospital intensive care unit. Once her symptoms waned, she got retested for COVID-19 — twice — for her own peace of mind before she stopped self-isolating. Both follow-up tests were negative, but close friends initially hesitated to go anywhere near her.

“I don’t fault them for it, but it did make me feel like I was being punished a little bit, and I didn’t really know how to process it,” she said. “You feel like no one really understands what you’re going through.”

Ballard and others in her position said people’s fear made sense, given the unknowns about the virus and the ongoing edict from top public health officials to practice social distancing. But the hurt these survivors experienced went beyond standard health precautions: Some had friends who were socializing with others, yet refused to see them.

Experts say such stigma is not surprising.

Dr. Seema Yasmin, director of the Stanford Health Communication Initiative and a clinical assistant professor in the department of medicine at Stanford University, called it an “unfortunate and predictable” response to a new disease.

“Stigma is terrible on many levels: It’s harmful and awful for those people that experience it, but it’s also a public health crisis because it gets in the way of public health interventions and epidemic response,” she said.

Yasmin witnessed stigma in West Africa during the Ebola epidemic, but said it is a phenomenon that is not confined to any particular culture, adding that there are similarities between how COVID-19 survivors are treated now and the decades-long stigma against HIV and AIDS patients in the United States.

The consequences can be broad, she said. With the coronavirus, stigma has hampered contact tracing efforts across the U.S. due to some COVID-19-positive individuals feeling too embarrassed to share their test results, contributing to the difficulties in containing outbreaks.

“We just have so many examples of this,” Yasmin said. “People are judged by this microscopic pathogen in their body as opposed to getting the care and support they need.”

'Why Are You Treating Me Like I'm a Leper?'

For some, the stigma feels not only personal, but also illogical.

Patti Kirk-Byrne, of Lake Carmel, New York, expected a warm greeting when she returned to her job as a hospital CT scan technologist after being out sick with the coronavirus for nearly six weeks. Instead, some of her longtime colleagues refused to be in the same room as her, despite the fact that she was wearing a mask. This confused her given their line of work.

“They’re X-raying patients all day long. They’re exposed to COVID patients on their shifts,” Kirk-Byrne, 52, said. “Why are you treating me like I’m a leper?”

Similar scenarios are playing out outside of health care settings, too. Sadie Nagamootoo, 44, of Valley Stream, New York, was diagnosed with the coronavirus in April, and still struggles with symptoms, including shortness of breath and a sore throat, nearly 140 days later. She feels her status as a so-called COVID-19 long hauler has made her friends even more inclined to avoid her, even though she has tested negative multiple times since May 7.

Last month, a friend who was going to stop by Nagamootoo’s sister’s house to say hello abruptly changed her mind when she found out Nagamootoo would be there. The friend said she was concerned she could catch the coronavirus and bring it home to her relatives, despite Nagamootoo’s negative tests.

“I spent 10 minutes trying to reassure her, but at the end of the day, you can’t blame anyone for wanting to be safe around their family,” Nagamootoo, a personal trainer, said. Still, it made her feel like she had the plague, she said, and sent her into a depression that she could not shake for a couple of weeks.

“People will say things like, ‘You never know, you may still have it in you,’” she said. “It messes with you psychologically because you begin to think and wonder if you really can magically transmit some impossible thing to somebody, even though there is no active virus inside of you.”

Cases such as Nagamootoo’s, in which symptoms are present many weeks after the initial infection, do not necessarily mean the person is still infectious, Yasmin said, adding that researchers are still trying to nail down what is causing lengthy symptoms.

“They may be suffering symptoms because of damage the virus did before it was eliminated from their body,” she said.

And there is emerging evidence that those who have recently recovered from the coronavirus may be among the most immune: On Friday, the Centers for Disease Control and Prevention indicated that recovered COVID-19 patients are protected from reinfection for at least three months, suggesting they do not need to quarantine if they are exposed to someone with a confirmed case within that time frame, as long as they do not develop symptoms.

Many survivors who have been ostracized feel they are among the safest people to be around.

“Why are you afraid of me? You should be afraid of the people who might be walking around with it and can spread it,” Kirk-Byrne said. “I just don’t understand. I’m not actively sick.”

Given the lingering questions around the coronavirus, Yasmin said no one should be blamed for erring on the side of caution, but she urged people to check in on friends and relatives who have had COVID-19 in ways that feel safe, such as with a phone call.

“Just the simple act of asking somebody what their needs are, what you might do to care for them during a really difficult time, that’s a simple gesture of reaching out,” she said.

That type of support was a lifesaver for Scott Emmons, 58, of Suffield, Connecticut. When he, his wife, and their son all got the coronavirus in March, his friends offered overwhelming support online. Some even dropped off weeks’ worth of food on the family’s doorstep.

Their kindness meant a lot to Emmons, the director of therapeutic recreation at a rehabilitation facility that was hit hard by the virus: More than 60 residents died from it, as well as two staff members, including Emmons’ assistant director.

“I think the hardest part was you couldn’t give anybody a hug,” he said. “It’s taken — emotionally, physically, mentally — a big toll on me.”

Others have not felt as supported. In Vacaville, California, Amy Delahoussaye-Demartini and her 7-year-old daughter, Giana, got into a rift with close friends when they got ill in July with the coronavirus. Their symptoms started out mild and seemed to just be a cold, but Delahoussaye-Demartini got tested for COVID-19 just to be safe. While they were awaiting the test result, Giana’s best friend, with whom she had been having play dates since lockdown restrictions were loosened in California, asked to come over; Delahoussaye-Demartini explained to the friend’s mom that they were waiting on COVID-19 test results and left the decision up to her.

The mother opted to send her child over to play with Giana, and then was furious when Delahoussaye-Demartini, a nurse, called a couple days later to tell her the bad news: The test had come back positive, and their family now needed to quarantine. Her friend’s family did not end up getting sick, and just over a week later, they proceeded to fly to Mexico for a vacation, according to Delahoussaye-Demartini.

“What baffles me is the hypocrisy of the behavior of people when it actually hits your circle,” she said, adding that the other family did not check in on her and her daughter when they were sick. “There was no compassion or empathy, not even a phone call to see how we were doing.”

Ballard, the Alabama accommodations specialist, hopes that by sharing her experience, it will help change the public perception of those who have the coronavirus.

“People don’t understand that dealing with the symptoms is a lot, and then the recovery process is a lot, too,” she said. “Just because you test positive, it doesn’t mean that you did anything wrong.” 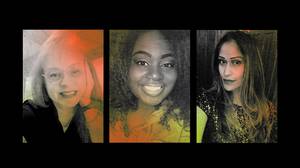