A study conducted by researchers at Julius-Maximilians-Universität Würzburg has shown that the antidepressant agent fluoxetine may be an effective drug for the early treatment of severe acute respiratory syndrome coronavirus 2 (SARS-CoV-2) among at-risk groups.

The team points out that clinicians started using fluoxetine during the seventies and that the patent expired long ago. This well-studied drug that has been used to treat people for almost four decades is widely available and relatively cheap, they say.

Given the high infectability and rapid transmission rate of SARS-CoV-2, some researchers have been avoiding time-consuming clinical trials of new treatments and instead testing the effects of drugs that are already available.

This resulted in the discovery of remdesivir as an effective antiviral treatment for SARS-CoV-2 infection. However, Bodem and the team point out that the drug is still unavailable to the majority of patients.

At the same time, other hopeful candidates, including lopinavir and chloroquine, were either ineffective or caused serious adverse side effects.

What Did the Researchers Do?

Now, Bodem and the team have also circumvented the lengthy clinical trial process and screened three “off label” drugs for their effectiveness against SARS-CoV-2.

The researchers tested the SSRIs fluoxetine, escitalopram, and paroxetine for activity against SARS-CoV-2 replication using a patient-derived viral isolate.

To test cytotoxicity, Vero cells were incubated with the agents for three days and then checked for cell growth. After incubating the cells with increasing concentration of the drugs, they were then infected with SARS-CoV-2. The concentrations of fluoxetine were close to the 0.8 µg/ml dose currently used in the treatment of depression.

What Did the Study Find?

The team reports that the 0.8µg/ml dose of fluoxetine was effective at inhibiting SARS-CoV-2 replication.

However, the researchers say it is unlikely that this suppressive effect involved inhibition of the serotonin reuptake transporter since neither paroxetine nor escitalopram inhibited viral replication.

Furthermore, fluoxetine comprises two optical isomers, and the S configuration is the dominant serotonin reuptake inhibitor. Yet, when the researchers investigated which isomer was inhibiting SARS-CoV-2 replication, both had a similar effect, thereby “underlining that the antiviral effect is unrelated to the serotonin reuptake receptor,” writes the team.

Finally, the team tested the specificity of fluoxetine by determining its effect on other viruses.

Fluoxetine did not inhibit the replication of Rabies virus or human respiratory syncytial virus, nor did it inhibit gene expression of human herpesvirus 8 or herpes simplex virus, thereby demonstrating that the drug acts in a virus-specific manner, writes the team.

The researchers say they think fluoxetine could play an important role in the early treatment of SARS-CoV-2 infected patients among at-risk groups. 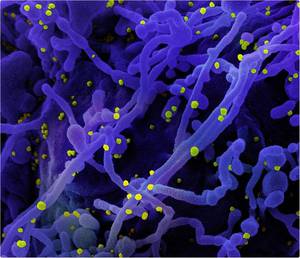 Recognizing & Addressing Unmet Needs in HER2m NSCLC
UP NEXT...
Multiple Myeloma: Who to Screen & How
CME