Researchers in Sweden have developed an app to help pregnant women achieve a healthy weight gain and lead a healthy lifestyle.

The app, titled ‘HealthyMoms’, was created by researchers from Linköping University in Sweden, who found that it contributed to pregnant women maintaining a better diet and therefore achieving a healthier weight gain during their pregnancy. Overweight or obese women also gained less weight during their pregnancy when they used the app.

The results from the evaluation of the app have been published in two scientific articles in the journal JMIR mHealth and uHealth.

Marie Löf, Professor at the Department of Health, Medicine and Caring Sciences at Linköping University, who led the research, said: “Pregnancy is a phase in life when many people try to do what is best for themselves and their baby. We think it’s important to be able to offer a tool that has a sound base in research. Our vision is that the app will help both those working in maternity care and pregnant women, by providing support for a healthy lifestyle.”

Weight gain during pregnancy is normal, with the NHS stating that most pregnant women gain between 10kg and 12.5kg. The definition of appropriate weight gain, or recommended weight gain, depends on the weight status prior to pregnancy. Gaining too much or too little weight can lead to health problems.

Johanna Sandborg, doctoral student at Karolinska Institutet, which is affiliated with Linköping University, said: “Gaining too much weight during pregnancy increases the risk of pre-eclampsia and gestational diabetes, and of subsequent overweight in both mother and child. At the same time, gaining less weight than recommended is associated with an increased risk of preterm birth and low birth weight.”

As well as supporting women to achieve a healthy weight gain during pregnancy, the app has also been designed to help pregnant women achieve an overall healthy lifestyle. The app provides an exercise guide, support with tracking diet and physical activity, advice on changing habits, recipes, and other information.

The app has been carefully developed by a team of nutritionists, dieticians, midwives, physicians, physiotherapists, behavioral scientists, and systems developers.

The Effectiveness of the App

Women from all BMI categories were included in the study. All participants registered their physical activity and food consumption (using the Riksmaten FLEX tool from the National Food Agency, Sweden) at 14 weeks of pregnancy and approximately six months later. The researchers also measured the women’s weight, height, and body fat percentage on both occasions.

Professor Löf added: “The diet in the group that used the HealthyMoms app was slightly better towards the end of the pregnancy than that of the control group. Another result is that the women who were overweight or obese before pregnancy in the intervention group gained on average 1.7 kg less than those in the control group. We regard it as very positive that our app can lead to an effect similar to that seen in studies evaluating interventions that require more personnel and resources.”

The researchers interviewed 19 of the women who had access to the app. In these interviews, the participants expressed that the app contained a good combination of useful tools and that they trusted the content since the app came from a credible source.

“We now have an evidence-based, validated tool that we can use in the healthcare system, benefitting both pregnant women and personnel,” concluded Professor Löf.

The researchers are working on how to spread the HealthyMoms app to a broader group, and to offer it in more languages than Swedish. They are working with co-workers who speak Somali and Arabic not only to translate the information, but also to adapt the app for different groups.

HER2 (ERBB2) Mutations in NSCLC: Mechanism of Disease 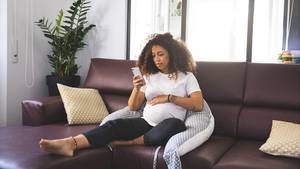