Cherie Smith's been outside her Highlands Ranch, Colorado, home and car just once since March 26. That was for an April 16 appointment with her obstetrician.

The office's "super caring" nurses take turns trying to convince Smith to come in for more in-person appointments because a surgery last year puts her at higher risk of premature labor. She's more worried about COVID-19 though and is on track for a June 20 cesarean section.

A new study of pregnant patients with COVID-19, the disease caused by the new coronavirus, gave expectant mothers a potential new reason to worry. It found higher rates of injury and blood clots in the placenta due to inadequate blood flow from the mother. The placenta is an organ that forms to provide oxygen and nutrients to the fetus and removes waste products from the baby's blood.

But even the Northwestern University Medicine researchers who conducted the study say their research on 16 patients isn't conclusive enough to suggest pregnant women ought to take greater social distancing and hygiene precautions than should be routine by now.

"I started getting panicky emails," said co-author and pathologist Dr. Jeffery Adam Goldstein, "but people should be cautious, rather than afraid."

The study in the Journal of Clinical Pathology involved pregnant women with COVID-19 who delivered between March 18 and May 5. It found the women's third trimester placentas were significantly more likely to show problems getting blood from the mother. This led to smaller placentas, to blood clots in or around the organ, or to cause a piece of it to die.

One patient had a stillbirth in the second trimester and another had a preterm delivery. But Goldstein said it's impossible to determine whether the virus was the cause.

The 15 surviving babies, however, all scored well on an overall well-being test immediately after birth. Fourteen went home within four days of delivery; the 15th is still in the hospital after being born prematurely to a mother whose COVID-19 was worsening and had pneumonia.

Placental injury raises concern because it can lead to the serious, potentially fatal complication pre-eclampsia, as well as miscarriage, preterm birth, and low birth weight, said Dr. Rahul Gupta, chief medical and health officer at the March of Dimes.

Still, it is different than actual transmission of the virus to the baby, which may be riskier but remains unproven, Gupta said.

A March study by Chinese researchers concluded that mothers could pass COVID-19 to fetuses in the womb, but it was widely discredited in the British medical journal The Lancet and the Journal of the American Medical Association.

Dr. Justin Brandt, a Rutgers University hospital OB/GYN, agrees there's no "compelling evidence" that COVID-19 is being transmitted from moms to babies.

"While this is reassuring on maternal and fetal fronts, it is worth emphasizing that we continue to learn more about SARS-CoV-2 and COVID-19 every day and there is much that we still do not know," said Brandt, an assistant professor in maternal-fetal medicine at Rutgers Robert Wood Johnson Medical School.

The new study does suggest placental injury could exacerbate the higher maternal and infant health risks faced by minorities and lower-income populations.

At Northwestern University Medicine's women's hospital, where study co-author and Dr. Emily Miller practices, the pregnant patients who tested positive for coronavirus are on a separate floor. Far more than stairs and test results set them apart, she said.

"It is stark how the sociodemographics differ and have made us all very aware of how social distancing is such a privilege," Miller, an OB/GYN said in a recent video interview. "Many of our communities don't have that privilege."

The Northwestern Medicine physicians and other childbirth experts say their recommendations remain the same even as states begin to relax restrictions. Pregnant women should stay vigilant about social distancing and hand washing, experts said.

"As we move to re-open our economy across the country with almost 2 million Americans infected with COVID-19, at no time has it been more important to take those precautions than now," said Gupta, the former health commissioner of West Virginia.

Pregnant women were initially grouped with others, such as the elderly and those with chronic health conditions, but that changed when it became clear neither they nor their babies were seriously affected by COVID-19.

Goldstein said it's a "tough ask" to tell pregnant women to "adhere to pre-opening up restrictions" and acknowledges the placenta study is a small one to base his recommendation on. But he does.

"It's hard to balance those real costs in friendship and possibly jobs against risks that are unknown and long term," Goldstein said.

He doesn't have to work to convince Smith, who already was afraid to get pregnant again after a miscarriage and a difficult fourth delivery. This pregnancy, which will be her fifth child, started out with a lot of bleeding. After that stopped, Smith's biggest concern has been contracting COVID-19.

She usually attends her doctor visits virtually, but recently went to one in the office.

"So far, so good," she said. "I think it’s going to be all right because I’m praying about it. God gave me free will to choose not to be stupid."

Lauren Mosteller, who gave birth to her daughter Zoe April 9, said "I hardly left my house for two months," and was nearly obsessed with COVID-19.

"I would sanitize our house to the point my fingers would prune from the wipes," she said. "I would take my husband's and my temperature at night."

When she had what she called normal third-trimester pregnancy symptoms like shortness of breath, they became "ruminating anxieties," Mosteller said.

"I was overall on edge and quite frankly, really scared," she said.

Now with a healthy baby, Mosteller is able to see some upside. She and Zoe are around husband and father, Kevin, more while he works from home. But she's afraid to invite her mother, who lives in Montana and works at a grocery store, out of fear Zoe could be infected.

"Holding our baby back from loved ones is never how I pictured these first few months, but we have to do what we can to protect her," she said. "Time is something you can’t get back and we are making sure our time in quarantine is well spent."

Fears of Virus Are a Risk Too

The fears prompted by the virus have heightened mental health concerns. Brandt said his practice is even more carefully screening patients for anxiety and depression due to the additional stress brought on by the pandemic.

He recommends patients maintain "open and honest communication" with doctors and maintain "comprehensive prenatal care during the pandemic."

"While we may not perform as many in-office visits, patients should call their doctors with concerns," he said.

The American College of Obstetricians and Gynecologists recommends health care providers "reassure patients that even during this time" there's effective mental health treatment and support if they become infected.

Mood and anxiety disorders are among the most common complications during pregnancy or in the first year after delivery. ACOG recommends maternal health care providers screen all women at least once during pregnancy for depression and anxiety symptoms.  Additional mental health screening also is needed during the postpartum period, ACOG said.

Most pregnant women infected with the virus will have mild to moderate symptoms, said Brandt. While he has seen severe symptoms in pregnant patients, most had medical problems such as asthma or diabetes, he said.

His advice, like at of study co-author Goldstein, Gupta, and others is pragmatic: Try to stay free of the coronavirus and COVID-19.

"At this time, the best strategy is to avoid infection,"  Brandt said. 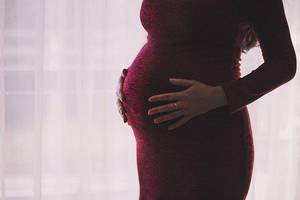