In a study published today in the journal Science of the Total Environment, led by scientists from the Leibniz Institute for Freshwater Ecology and Inland Fisheries (IGB) and the Leibniz Institute for Zoo and Wildlife Research (Leibniz-IZW), bacterial communities were examined in urban water bodies and wastewater in Berlin and compared to less anthropogenically influenced lakes from surrounding rural regions.

Bacterial communities are often well adapted and stable in a particular environment whether it be a human mouth or a lake. Humans are altering environments at an increasing rate, none more so than in cities and their surroundings in the process of urbanization.

The results reveal that urbanization introduces large amounts of nutrients, chemical pollutants and antimicrobial products, and thereby changes the makeup of the microbiome by favoring groups of bacteria that contain human pathogenic bacteria, with yet unknown consequences for ecosystem functioning and human and animal health.

Whether an armpit, garden soil or water, almost every place on earth has its own natural bacterial community. By altering environments, humans also change the bacterial composition of such places by creating new conditions that favor some groups of bacteria over others. In a new study, scientists from IGB and Leibniz-IZW along with colleagues from other members of the Leibniz Research Alliance tracked these changes in bacterial composition connected with the process of urbanization and demonstrated that bacterial communities in urban waterbodies and wastewater in Berlin are distinctly different from those of rural lakes in surrounding regions in the federal states of Brandenburg and Mecklenburg-Vorpommern. The process of urbanization does not only introduce human bacteria ("humanization") but can also introduce excessive amounts of nutrients ("eutrophication"), chemical pollutants and antimicrobial products such as antibiotics, which can drastically favor specific bacteria over others and change the makeup of the microbiome with yet unknown consequences for ecosystem functioning and human and animal health.

"We wanted to know whether urban water shows signatures of urbanization that are predictive of the types of bacteria present in a given community within the city limits," says Prof. Hans Peter Grossart of the IGB, co-principle investigator of the study. The results demonstrate that multiple bacterial groups are enriched in urban waters, the most extreme examples being found in the inflows and outflows of a wastewater treatment plant, pointing to a "humanization" of urban lake microbiomes.

"Surprisingly, the enriched bacterial groups in urban environments are those that often contain pathogenic species. This suggests that if a pathogen gets into such an environment, it will find a very supportive environment in which to grow," says Prof. Alex Greenwood, head of the Leibniz-IZW Department of Wildlife Diseases and co-principle investigator of the study. This could potentially lead to outbreaks in such environments compared to rural water bodies, where such favorable conditions for pathogens were not found in general.

In the future, water hygiene may have to consider de-urbanizing the microbiomes of city water sources to establish more natural water ecosystems within the city. This will become increasingly challenging and important as climate change makes many urban areas dryer and more nutrient rich, further altering the bacterial communities of urbanized water. This may have profound effects for human and animal health as the risk of contamination with harmful microbes increases.

Case Study: 12-Year-Old Hospitalized ALL Patient Develops a VTE and Is on Day 3 of UFH Therapy—How Do You Handle the Acute Care and Transition? 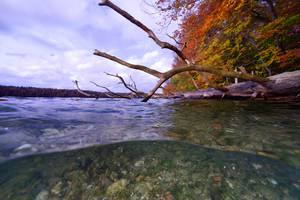 Case Study: 12-Year-Old Hospitalized ALL Patient Develops a VTE and Is on Day 3 of UFH Therapy—How Do You Handle the Acute Care and Transition?
UP NEXT...
Novel Hormonal Therapy Advances in Metastatic Hormone-Sensitive Prostate Cancer
CME