Baudax Bio, Inc. (NASDAQ: BXRX), a pharmaceutical company focused on therapeutics for acute care settings, today announced that the results of the Phase IIIb study evaluating ANJESO (meloxicam) injection administered preoperatively before colorectal surgery were published online in the journal Pain Management. ANJESO is the Company’s marketed, non-opioid, once daily, intravenous (IV) non-steroidal anti-inflammatory (NSAID) agent for use in adults for the management of moderate to severe pain that is indicated for use alone or in combination with other non-NSAID analgesics.

“Adequate pain relief is an important component of ERAS (enhanced recovery after surgery) protocols and is associated with various beneficial effects, including shorter length of stay (LOS), enhanced recovery, faster mobilization, and better patient satisfaction,” said Jennifer Silinsky, MD, Colorectal Surgeon, Tulane University School of Medicine, and lead author of the manuscript. “Opioids have historically been a mainstay of perioperative pain control, however, an important goal of ERAS protocols is to reduce opioid consumption, which in turn may lead to decreased known opioid-related risks and adverse events. In this study, both groups received a standardized ERAS protocol that included pain control and the results demonstrated that ANJESO was superior to placebo when added to the ERAS regimen. In addition, ANJESO was generally well tolerated, with over 92% of patients reporting satisfaction with their post-operative pain medication. ANJESO-treated patients also experienced statistically significant reductions in opioid consumption, time to first bowel sounds, time to first bowel movement, and time to hospital discharge, all compared to placebo. These data support the efficacy and safety of ANJESO administered once daily, with administration beginning before starting of surgery, as part of a standardized multimodal regimen in patients undergoing colorectal procedures.”

“We are honored to have these data published by such a well-regarded medical journal to be shared with the anesthesia, pain management, and surgical community,” said Stewart McCallum, M.D., F.A.C.S., Chief Medical Officer of Baudax Bio. “We believe the successful outcome of this study represents an important advancement for colorectal surgery physicians and their patients and we are sincerely grateful to all of the patients and investigators who participated in the study. The ANJESO launch is progressing well and these positive results will continue to inform our ongoing physician education initiatives as we work to drive adoption of ANJESO.”

The full manuscript can be accessed here.

Summary of the Phase IIIb Results

This multi-center, randomized, double-blind, placebo-controlled Phase IIIb study evaluated preoperative doses of ANJESO in 55 patients undergoing bowel resection and/or anastomosis. Patients were randomized 1:1 to receive ANJESO or placebo with the first dose administered 30 minutes before the start of surgery, then every 24 hours on top of a standardized ERAS protocol that included a multimodal pain management plan in addition to studying treatment; all patients received gabapentin 300mg once before surgery, and acetaminophen 650mg starting before surgery and continuing every 8 hours until 24 hours after the last dose of study medication. Following surgery, an opioid rescue was available upon request.   The primary objective of the study was to assess the safety of ANJESO when administered pre-operatively, with a key measure being the incidence and severity of adverse events. Numerous additional efficacy parameters were also assessed in this study, including various pain outcomes (e.g., patient global assessment [PGA], brief pain inventory [BPI], etc.), opioid consumption, return of bowel function, healthcare resource utilization, and hospital length of stay.

While patients in the placebo group had higher opioid use, ANJESO-treated patients had similar or better pain scores and similar patient satisfaction. BPI was significantly lower for the ANJESO group on a postoperative Day 1 (p=0.03). For other BPI time intervals, there were no meaningful differences between the study groups. Most subjects in both the ANJESO (92.3%) and placebo (92.6%) groups were satisfied with their postoperative pain medication. There were no significant differences in PGA of pain control between the groups.

The mean time from the end of surgery to actual hospital discharge and mean total LOS were significantly shorter (28 hours) for the ANJESO group. There was no significant difference in the total cost of hospital stay between the study groups, although costs in the ANJESO group, but not the placebo group, were driven by outliers. Regression analysis demonstrated that increased opioid consumption was associated with increased LOS, with every 1mg increase in opioid consumption from hour zero to discharge was associated with a 0.58-hour increase in LOS (p=0.0005). Surgery type (bowel resection vs other) was significantly associated with total costs and LOS, with the highest costs linked to bowel resection.

The mean times to first bowel sound, first flatus, and first bowel movement were significantly shorter in the ANJESO group (p=0.02, p=0.03, and p=0.02, respectively). Mean times to the first ambulation were similar between the ANJESO and placebo groups.

ANJESO (meloxicam) injection is a proprietary, long-acting, preferential COX-2 inhibitor that possesses analgesic, anti-inflammatory, and antipyretic activities, which are believed to be related to the inhibition of cyclooxygenase type 2 pathway (COX-2) and subsequent reduction in prostaglandin biosynthesis. ANJESO was launched in the U.S. in June 2020 following its approval by the Food and Drug Administration in February 2020. ANJESO is indicated for the management of moderate to severe pain, alone or in combination with other non-NSAID analgesics. Because of the delayed onset of analgesia, ANJESO alone is not recommended for use when a rapid onset of analgesia is required. ANJESO is supported by two pivotal Phase III clinical efficacy trials, a large double-blind, placebo-controlled Phase III safety trial, and four Phase II clinical efficacy trials, as well as other safety studies. As a non-opioid, Baudax Bio believes ANJESO has the potential to overcome many of the issues associated with commonly prescribed opioid therapeutics, including respiratory depression, constipation, excessive nausea, and vomiting, as well as having no addictive potential while maintaining meaningful analgesic effects for relief of pain. ANJESO was designed using the NanoCrystal® platform, a technology that enables enhanced bioavailability of poorly water-soluble drug compounds. NanoCrystal® is a registered trademark of Alkermes Pharma Ireland Limited (APIL).

ANJESO is indicated for use in adults for the management of moderate-to-severe pain, alone or in combination with non-NSAID analgesics.

Non-steroidal anti-inflammatory drugs (NSAIDs) cause an increased risk of serious cardiovascular thrombotic events, including myocardial infarction and stroke, which can be fatal. This risk may occur early in treatment and may increase with the duration of use.

ANJESO is contraindicated in the setting of coronary artery bypass graft (CABG) surgery.

NSAIDs cause an increased risk of serious gastrointestinal (GI) adverse events including bleeding, ulceration, and perforation of the stomach or intestines, which can be fatal. These events can occur at any time during use and without warning symptoms. Elderly patients and patients with a prior history of peptic ulcer disease and/or GI bleeding are at greater risk for serious GI events.

ANJESO is contraindicated in patients with:

Known hypersensitivity (eg, anaphylactic reactions and serious skin reactions) to meloxicam or any components of the drug product.
History of asthma, urticaria, or other allergic-type reactions after taking aspirin or other NSAIDs.
In the setting of coronary artery bypass graft (CABG) surgery.
Moderate to severe renal insufficiency patients who are at risk for renal failure due to volume depletion.

Hepatotoxicity: Elevations of ALT or AST have been reported in patients with NSAIDs. In addition, rare, sometimes fatal, cases of severe hepatic injury including fulminant hepatitis, liver necrosis, and hepatic failure have been reported. Inform patients of warning signs and symptoms of hepatotoxicity. Discontinue ANJESO immediately if abnormal liver tests persist or worsen or if clinical signs and symptoms of liver disease develop.

Hypertension: NSAIDs including ANJESO can lead to new onset of hypertension or worsening of preexisting hypertension, which may contribute to the increased incidence of cardiovascular (CV) events. Patients taking some antihypertensive medications may have impaired response to these therapies when taking NSAIDs. Monitor blood pressure.

Post MI Patients: Avoid the use of ANJESO in patients with recent MI unless the benefits are expected to outweigh the risk of recurrent CV thrombotic events. If ANJESO is used in these patients, monitor for signs of cardiac ischemia.

Exacerbation of Asthma Related to Aspirin Sensitivity: ANJESO is contraindicated in patients with aspirin-sensitive asthma. Monitor patients with preexisting asthma (without aspirin sensitivity).

Serious Skin Reactions: NSAIDs, including ANJESO, can cause serious skin reactions, including exfoliative dermatitis, Stevens-Johnson Syndrome (SJS), and toxic epidermal necrolysis (TEN), which can be fatal and can occur without warning. Discontinue ANJESO at the first appearance of skin rash or other signs of hypersensitivity.

Hematologic Toxicity: Anemia has occurred in NSAID-treated patients. Monitor hemoglobin or hematocrit in patients with any signs or symptoms of anemia. NSAIDs, including ANJESO, may increase the risk of bleeding events. Monitor patients for signs of bleeding.

Drugs That Interfere With Hemostasis (e.g., warfarin, aspirin, SSRIs/SNRIs): Monitor patients for bleeding who are concomitantly taking ANJESO with drugs that interfere with hemostasis. Concomitant use of ANJESO and analgesic doses of aspirin is not generally recommended.

ACE Inhibitors and ARBs: Concomitant use with ANJESO in elderly, volume-depleted, or those with renal impairment may result in deterioration of renal function. In such high-risk patients, monitor for signs of worsening renal function.

The most common adverse reactions in controlled clinical trials occurring in ≥ 2% of patients treated with ANJESO and at a greater frequency than placebo include constipation, gamma-glutamyltransferase increased, and anemia.

USE IN SPECIFIC POPULATIONS

Pregnancy: The use of NSAIDs during the third trimester of pregnancy increases the risk of premature closure of the fetal ductus arteriosus. Avoid the use of NSAIDs in pregnant women starting at 30 weeks gestation.

Infertility: NSAIDs are associated with reversible infertility. Consider withdrawal of ANJESO in women who have trouble conceiving.

Baudax Bio is a pharmaceutical company focused on therapeutics for acute care settings. The launch of Baudax Bio’s first commercial product ANJESO® began in June 2020 following its approval by the U.S. Food and Drug Administration in February 2020. ANJESO is a once-daily IV NSAID with preferential Cox-2 activity, which has completed three Phase III clinical trials, including two pivotal efficacy trials, a large double-blind Phase III safety trial, and other studies for the management of moderate to severe pain. In addition to ANJESO, Baudax Bio has a pipeline of other pharmaceutical assets including two novel neuromuscular blocking agents (NMBAs) and a proprietary chemical reversal agent specific to these NMBAs which is currently in preclinical studies, and intranasal dexmedetomidine which is being developed for possible uses in pain or sedation. For more information please visit www.baudaxbio.com. 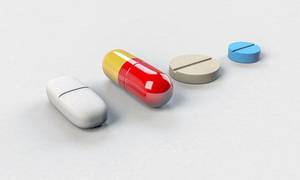 New Treatment Approaches for Historically Inoperable Pancreatic Cancers
UP NEXT...
Addressing Gaps in Biomarker Testing for mCRC at Diagnosis
CME