The U.S. has made significant strides against cancer in the past two decades, with death rates dropping and survivors living longer — but Black Americans are still being left behind.

A report published Wednesday by the American Association for Cancer Research highlights the “glaring” racial disparities in cancer care, including the stark statistic that Black Americans have the highest overall death rate from cancer of any racial or ethnic group in the nation, and have for the past four decades.

“We have without a doubt been doing better with treating cancer as a whole, but we still see significant differences in certain types of cancer and still struggle with closing the gaps in these disparities,” report co-author Dr. John Carpten, chair of the cancer research association’s Minorities in Cancer Research Council, said.

Education and income are the most important social factors related to higher rates of cancer deaths in communities of color, according to the AACR report. More than one-third of cancer deaths among American adults ages 25 to 74 could be prevented by eliminating socioeconomic disparities.

“The treatment of cancer is not set up for individuals who get paid by the hour,” Marissa Howard-McNatt, director of the Breast Care Center at Wake Forest Baptist Health in North Carolina, said, adding that low-income people of color may not be able to miss work even when they suspect something is wrong with their health, let alone for routine screening.

“They may not be able to afford to take time off to get screened for cancer that they may or may not have,” said Howard-McNatt. “That’s a very hard decision to make, between your health and your income.”

Nearly 20 percent of the racial disparities in colorectal cancer deaths can be attributed to lower screening rates among African Americans, according to the American Cancer Society.

Lack of insurance can also be a barrier to screenings. In 2018, less than 40 percent of women ages 50 to 74 who did not have health insurance had gotten a mammogram in the past two years compared with 75 percent of insured women, according to the National Cancer Institute.

Where a person lives also plays a role in their risk of cancer. People who live in low-income neighborhoods are more likely to be exposed to pollution and have less access to resources that support good health. Air pollution alone accounts for around 5 percent of lung cancer cases, according to the report.

“Where people live matters. Socioeconomic status matters for health,” Dr. Karen Winkfield, a radiation oncologist and the incoming executive director of the Meharry-Vanderbilt Alliance in Nashville, Tennessee, said. “Where people live dictates what resources they have access to. It influences what environmental exposures they have, whether that be lead or asbestos or a dumpsite, and the food they eat.”

“Socioeconomic injustices and health care inequities are undoubtedly the root of and the foundation of the health disparities we see in the U.S., and we can’t ignore that,” Carpten said. “We can make a lot of progress in our understanding of how cancers manifest in different people, but without addressing those inequalities, these disparities will always exist.”

There are also huge racial gaps in who participates in clinical trials, which means doctors don’t have a clear understanding of how certain cancers may appear differently in patients of different races.

Clinical research done with predominantly white participants is applied to all patients, regardless of race or ethnicity, even when cancers may respond to treatments tailored in a different way.

A report published in August in the Annals of Internal Medicine found that less than 8 percent of participants in cancer treatment clinical trials were African American, even though they have the same probability of having cancer over the course of their lives as white Americans, according to the American Cancer Society.

Investigators must design research to better understand the biological differences in the way some cancers manifest themselves in different people, Carpten said.

“By teasing out those differences, perhaps we can come up with different ways to diagnose and treat cancer in tailored ways,” said Carpten, noting that precision treatments still aren’t all that precise, because these targeted treatments have largely been designed using white patients. “If we can do that, we can ensure access to cancer treatment innovations across all people,” he said.

According to the report, many of the communities that are disproportionately burdened by cancer are also drastically underrepresented in the U.S. health care and research field.

“We really want there to be programs that make sure that the health care workforce reflects the population to drive both diversity in research topics and to make patients feel comfortable,” Carpten said. “There is a sense of responsibility and purpose when it is your community that is being so disproportionately impacted by these health outcomes.”

But workplace diversity alone isn’t enough, Winkfield said. Participation in cancer research, clinical trials, early detection, and prevention starts with education and making sure a person’s needs are met, such as paying for rent and food, so they can afford to take the time to get screened for cancer.

“We need to talk to individuals who are being impacted the most and find out how they want to receive information,” she said. “We can only do so much sitting in a lab with a pipette in our hand. If I can’t get enough black tissue samples because there aren’t enough Black women coming into the clinic, there is a downstream problem.” 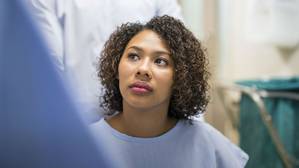 Assessing Quality of Care: Implementing a Lung Screening Program
UP NEXT...
Investigating Immunotherapy & Its Role in NSCLC
CME