Newswise — A new sports program is kicking goals for men’s health as researchers from the University of South Australia set their sights on improving physical and mental wellbeing of Australian men.

With men having a lower life expectancy than women – attributed to a higher prevalence of cardiovascular disease and diabetes – researchers are keen to know whether playing social sport or group exercise in a bootcamp format is better for improving men’s health.

The study is one of the first of its kind to look beyond the physical health impacts of sport participation in Australian Men.

It will compare the health benefits of men aged 35-54 years as they participate in either traditional group circuit bootcamp sessions, or a modified-rules Australian football program.

According to the World Health Organization, sport is an underutilized avenue to increase physical activity, with the global cost of physical inactivity estimated to be INT$54 billion per year in direct health care.

“When it comes to exercise, Aussie men have dropped the ball, with fewer than 50 percent reaching the recommended levels of physical activity,” Blake says.

“This is worrying, especially as men are more susceptible to chronic health conditions, many of which can be prevented through regular exercise.

“We know that exercise and sport can help improve physical health. We also know that people are more likely to stick to an exercise program when it’s delivered in a group setting.

“But what we don’t know, is whether there are any specific differences between group exercise or social sports that can deliver improved health benefits among Aussie men – this is where our study comes in.

“Men in the study will be assigned either a modified Australian Rules football program, or an outdoor bootcamp/group exercise circuit program, where they’ll undertake two-hour-long training sessions per week over a 12-week period.

“By looking at the effects of these exercise programs on a range of markers of health and fitness, we’re hoping to see how men respond – not only in terms of their physical health but also their mental health and social wellbeing.”

Hypothetical Patient Case Study for a Treatment Regimen for Adults With BRAF V600E/K–Mutant Unresectable or Metastatic Melanoma
Jennifer Caudle, DO 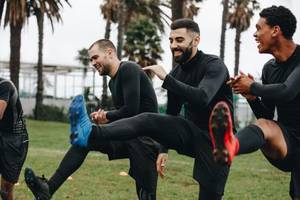