Photo: by Thirdman from Pexels

A new study has highlighted the prevalence of depression in bowel cancer patients up to five years after surgery to treat their cancer. Over a third of patients experienced clinically significant depression during the course of the study, with one in seven still experiencing symptoms five years after undergoing surgery.

A research team, led by the University of Southampton and funded by Macmillan Cancer Support, surveyed 872 adult patients with non-metastatic colorectal cancer before surgery and conducted follow up surveys at regular intervals until 60 months post-surgery. The findings have been published in the journal Colorectal Disease.

Lead author Dr Lynn Calman, Associate Professor in Nursing at the University of Southampton, said, “Depression in people living with colorectal cancer is an important clinical problem. Our study shows that the level of depression exceeds that of general population over time. The research has also helped us to identify important time points where certain patients are at a high risk of depression which can inform strategies for recognition and referral for appropriate support.”

The results of the survey showed that before surgery over a fifth of participants (21%) reported clinically significant levels of depression, which reduced to 14% at 5 years. Risk factors identified before surgery that predict subsequent depression were pre-existing clinically significant depression and anxiety, previous mental health service use, low confidence to manage illness related problems, poor health, and low social support.

While the above results are based on people’s experiences pre-Covid, evidence suggests the social isolation linked to the pandemic could be further worsening the mental health of people with cancer. The research team are currently carrying out another study into the impact of COVID-19, also funded by Macmillan Cancer Support; interim results from this have found that four in five (81%) cancer patients surveyed remained at home at all times in the pandemic, and nearly half (45%) of these have experienced at least two serious psychological impacts from the pandemic, such as feeling afraid, depressed or helpless.

Dany Bell, Strategic Advisor for Treatment, Medicines and Genomics at Macmillan Cancer Support said, “We know that for many people, being diagnosed with cancer and going through treatment is one of the scariest things they have ever faced, and this can often have a serious impact on people’s mental health.

“Cancer affects people differently and at Macmillan we’re here to ensure everyone living with cancer gets the support that’s right for them. We’re urging anyone in need of help – or simply someone to talk to –  to get in touch with the trained nurses and advisors on our Support Line who are available at the end of the phone, seven days a week.

The new findings also showed that people with bowel cancer who had undergone neoadjuvant chemotherapy were also more likely to experience depression, perhaps explained by the fact these patients usually face more complex treatment, side effects and increased treatment time.

Dr Calman continued, “in this study we investigated risk factors of depression at two key time points: close to diagnosis before surgery and two years after surgery, when routine oncological check-ups end.

“Depression in people living with cancer can lead to poor health and wellbeing and this has an impact on long term outcomes. Recognising those colorectal cancer patients who are at a higher risk and referring them to the right support services could therefore lead to overall improved outcomes for patients.” 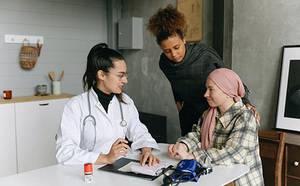