HSE academics joined researchers from the Turner Scientific Research Institute for Children's Orthopaedics to study how the brains of children with arthrogryposis control elbow flexion after muscle transplantation. They found that in such patients, more motor neuron activity occurs, which means that the start of a new movement requires more effort from the brain. The paper 'Feasibility and Challenges of Performing Magnetoencephalography Experiments in Children with Arthrogryposis Multiplex Congenita' was published in Frontiers in Pediatrics.

The study is being carried out as part of a Russian Science Foundation grant headed by Iiro Jaaskelainen, Academic Supervisor of the International Laboratory of Social Neurobiology.

Arthrogryposis is a congenital disorder of the musculoskeletal system that causes deformation of extremities, underdeveloped joints and muscles, and limited movement. One in 10,000 newborns is born with arthrogryposis multiplex congenita (AMC). The disease does not progress with age and does not affect a child's cognitive abilities.

For people with arthrogryposis, it is important to restore the ability to bend the elbow, which may help the individual to take independent care of themselves. This is facilitated by the transplantation of muscles capable of controlling elbow flexion. In such cases, it is necessary to teach the patient's brain to control the extremity in a way that was previously not possible. The brain does not know this pattern of movement, as it had not previously been produced by the individual in their daily activities.

The study of brain activity related to elbow flexion enables the development of effective methods to rehabilitate people with arthrogryposis after muscle transplantation. Such studies have rarely been done on children, despite the fact that from year to year the age at each patients undergo autotransplantation surgery decreases, and more information is needed about the young AMC patients' brain activity which can significantly differ from that of adults.

To bridge this gap, scholars from the HSE Institute for Cognitive Neuroscience  studied the sensory-motor function in AMC children as compared with healthy age-match controls and adults. They invited four children with AMC and five healthy children aged 5–10 to the joint MSUPE-HSE MEG Centre equipped with a unique 306-channel magnetoencephalography (MEG) device. Three of the four children with arthrogryposis had previously gone through muscle transplantation surgery to restore elbow flexion.

Participants of the experiment were asked to sit at a table and bring their hand toward their mouth after hearing a voice command from a researcher, imitating the process of feeding themselves. Meanwhile, their brain activity was recorded using MEG. Each participant was asked to perform 80 movements—40 with each hand.

Combined MRI-MEG analysis of the sources of the brain activity showed that in patients with arthrogryposis who had undergone muscle transplantation, the bilateral cortex activation accompanying the hand movement prevailed as compared to contralateral activation in healthy control. Also, in AMC patients, the cortical sensory-motor activity was less constrained to the physiologically relevant areas of sensorimotor cortex in comparison with healthy children and adults.

'Bilateral cortex activity can be explained by relative difficulty of  initiating movement by children with motor disorders: AMC patients with arthrogryposis might have to engage more motor neurons in this task,' said Evgeny Blagoveshchensky, the co-author of the study and Senior Research Fellow at the HSE Institute for Cognitive Neuroscience.

The brain activity dynamics in AMC patients was different from that in healthy control groups: the brain responses to movement extended over a greater amount of time. The slower the patient's movement movement, the more extended the pattern of summarized the activity accompanying it. This is likely due to the involvement of a complicated compensatory mechanism in the elbow flexion process.

According to the researchers, since starting a movement is most difficult for children with arthrogryposis after muscle transplantation, possible rehabilitation strategies may include non-invasive brain stimulation, which would make it easier for them to start the movement. 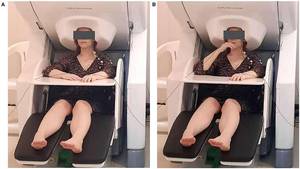