The Centers for Disease Control and Prevention announced Sunday that people throughout the U.S. should avoid events of 50 people or more for the next eight weeks.

The announcement comes as some major cities have already banned large events and ordered bars and restaurants to close.

The CDC said in its release that it "recommends that for the next 8 weeks, organizers (whether groups or individuals) cancel or postpone in-person events that consist of 50 people or more throughout the United States."

"Events of any size should only be continued if they can be carried out with adherence to guidelines for protecting vulnerable populations, hand hygiene, and social distancing. When feasible, organizers could modify events to be virtual," the CDC said.

The guidance would mean no public events through early May. The CDC noted that its guidance "is not intended to supersede the advice of local public health officials" and "does not apply to the day to day operation of organizations such as schools, institutes of higher learning, or businesses."

The new guidance emphasizes the importance health officials have put on "social distancing," a strategy to slow the spread of the coronavirus to keep from overwhelming the country's health care system. It has also taken on the catch phrase "flatten the curve."

Many major sporting events and other large gatherings have been canceled, but health officials have urged more drastic action to limit the spread of the coronavirus. Ohio, Illinois and Massachusetts have either issued orders or asked that bars and restaurants be closed. California Gov. Gavin Newsom asked nightclubs, wineries and brewpubs to close their doors.

The CDC's guidance, the strongest recommendation yet for a nationwide moratorium on even relatively small gatherings, would bring the U.S. closer to the kinds of widespread actions seen in parts of Europe that have been particularly hard hit, including Spain and France. 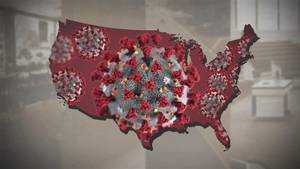