Chemotherapy halves the risk of a rare form of kidney cancer coming back after surgery, the largest ever trial conducted in the disease worldwide has found.

Patients given chemotherapy within three months of surgery saw the risk of their cancer coming back or spreading reduced and were much more likely to live cancer free for three years or more.

The new results are set to change clinical practice around the world - with chemotherapy being recommended after surgery for all suitable patients with a rare tumor of the urinary system that is large or just starting to spread.

Cancer of the ureter and renal pelvis - starting in the tubes leading from the kidney to the bladder - is relatively rare, with nearly 1,000 people being diagnosed with the disease in the UK each year.

The disease is often diagnosed at a late stage, with over half of patients dying from it, so more effective treatment options are desperately needed.

The POUT trial, led by researchers at The Institute of Cancer Research, London, and the Lancashire Teaching Hospitals NHS Foundation Trust, involved 261 people with cancer of the ureter and renal pelvis.

The trial assessed the benefit of giving people four cycles of a combination of two chemotherapies compared with the current standard of treatment, where patients are actively monitored to spot signs of their cancer coming back after having surgery.

The study was published in the prestigious journal The Lancet Oncology today (Thursday), and was funded by Cancer Research UK.

The researchers found that treating patients with platinum-based chemotherapy after surgery reduced the risk of dying or of ureter and renal pelvis cancer returning by 55 percent.

As expected, more people experienced serious side-effects in the chemotherapy group compared with patients under surveillance - around 44 percent, similar to the rates of side-effects seen in other groups of patients treated with these drugs.

The combination treatment of gemcitabine with platinum chemotherapy used in the study is a low-cost, generic treatment option and is already routinely used on the NHS in a range of other cancers.

The researchers are now working to incorporate the trial results into international clinical practice guidelines, so that chemotherapy after surgery will become the new standard of care.

Next, the team plan to study the benefit of adding immunotherapy or targeted treatment to chemotherapy in this form of the disease.

Professor Emma Hall, Professor of Oncology Clinical Trials at The Institute of Cancer Research, London, who co-ordinated the study, said:

"Our clinical trial has found a considerable benefit of giving chemotherapy to people with cancers that start in the tube leading from the kidney to the bladder - cutting the risk of dying or the disease coming back after surgery by more than half.

"Giving chemotherapy after surgery could give people with this rare form of cancer years more to spend quality time with their families. The results of our study are set to change clinical practice in the UK and internationally, and I'm hopeful that patients will start benefiting very soon.

"Running clinical trials in patients with rare cancers comes with its challenges, including finding enough people to take part - so it's fantastic to see such clear evidence of patient benefit from this study. It shows how important it is to run studies like this to improve treatment options for patients with rarer forms of cancer."

"We are very grateful that our participants and the entire uro-oncology community in the UK got behind this study. It is the first to show that there is a real chance for people with upper urinary tract cancer to stay free of their disease for much longer. This type of cancer has always been forgotten and to be able to deliver this, a study that everyone said was impossible, to benefit patients is a privilege."

Retired Eddie Marchant, 74, from Hinckley, Leicestershire, was diagnosed with this type of kidney cancer in 2014 after he noticed blood in his urine.

Doctors successfully treated him with surgery, removing his stage 3 tumor.

The former Royal Artillery non-commissioned officer, who served for 18 years in the Forces, was then invited to join the POUT trial, looking at whether giving chemotherapy after surgery improves outcomes.

He has been cancer free since and said:

"I feel very fortunate to have been invited on to the trial and have had clear scans ever since my treatment.

"I've been able to get on with my life, going on holiday, speed walking to keep fit and enjoying playing and singing some of my favorite Buddy Holly and Eagles tunes."

"Thanks to this practice-changing trial, we now have more insight into the best way to treat this rare type of kidney cancer. We hope to see this adopted as the standard treatment in the near future, giving patients the best chance of beating the disease.

"Understanding how to treat rare types of cancer can be harder than it is for more common cancers. However, at Cancer Research UK, we're dedicated to improving treatments for all forms of the disease, no matter how many people are affected." 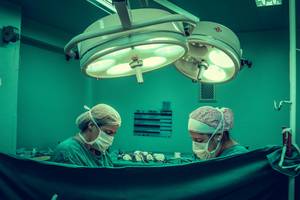