In a new paper published March 5 in the journal Cell Stem Cell, researchers in Whitehead Institute Member Rudolph Jaenisch's lab introduce a new way to model human neuroblastoma tumors in mice using chimeras—in this case, mice that have been modified to have human cells in parts of their nervous systems. "This may serve as a unique model that you can use to study the dynamic of immune cells within human tumors," says Malkiel Cohen, a postdoc in Jaenisch's lab and the first author of the paper.

Neuroblastoma is a rare and unpredictable form of childhood cancer that affects around 800 young children in the US each year. Neuroblastoma tumors often occur in parts of the sympathetic nervous system, which includes the nerves that run parallel to the spinal cord and the adrenal medulla, part of the glands that produce hormones such as adrenaline. Neuroblastoma is notoriously hard to study primarily because of its disparate behavior: the tumors often shrink spontaneously in infants, while in toddlers they are highly aggressive and often fatal. "The seeds for the cancer are sown during fetal life," says Rani George, MD, Ph.D., an associate professor of pediatrics at Harvard Medical School and a neuroblastoma researcher and physician at Dana-Farber Cancer Institute and Boston Children's Hospital, and a co-senior author on the paper. "For obvious reasons, you can't really study the development of these tumors in humans."

Until now, researchers didn't have many realistic ways to study these tumors in animal models, either. They could create transgenic mice with cancer-causing genes, but the resulting tumors were mouse tumors, not human ones, and had some key differences. Another method involved taking human tumor cells and implanting them in a mouse—a process called xenotransplantation—but that only worked in mice with compromised immune systems, and didn't allow researchers to study how the tumors formed in the first place or how they interacted with a fully functioning immune system. "This is where we think the new model is a perfect fit," said Stefani Spranger, Ph.D., an assistant professor of Biology at the Massachusetts Institute of Technology (MIT) and the Koch Institute for Integrative Cancer Research at MIT and a co-senior author on the paper.

Human-mouse chimeras have been used in the past to study Alzheimer's disease and brain development. Jaenisch, who is also a professor of biology at MIT, and his lab had been working for years to create chimeric mice with human cells in the neural crest—the group of developing cells that go on to form parts of the sympathetic nervous system—and published their findings in 2016. "In this study, we hoped to use these mice with human neural crest cells to study how neuroblastoma tumors form and respond to immune system attacks," Jaenisch says.

To create these chimeric mice, Cohen and coauthors at MIT's Koch Institute and the Dana-Farber Cancer Institute first engineered human pluripotent stem cells to express two genes known to be abnormal in neuroblastoma, MYCN and mutated ALK and modified them so they became neural crest cells, from which human neuroblastomas are derived. The genes could be turned on and off with the addition of doxycycline, an antibiotic. They also inserted the gene for GFP, a brightly glowing fluorescent protein originally isolated from jellyfish. This would allow the team to tell whether the cells were spreading correctly through the bodies of the mice, and would cause any tumors originating from these human cells to be luminous under fluorescent light.

The researchers injected mouse embryos with these cells and watched over the course of embryonic development as the cells proliferated and human tissues crept into the developing peripheral nervous systems of the tiny mice. To activate the two cancer-causing genes, researchers spiked the pregnant mice' water with doxycycline, and over the next few days in utero—and in the weeks and months after the pups were born—the researchers inspected the chimeras to see whether tumors would appear.

Over the course of the next 15 months, 14% of the mice developed tumors—29 mice out of 198 total. The tumors mostly appeared in the space behind the abdominal cavity close to the nerves along the spinal cord, although one mouse developed a tumor in its adrenal gland. Both locations are common places for human children to develop neuroblastoma. The researchers took samples of the tumors and found that they contained the glowing protein eGFP, which confirmed that they were of human origin.

When the team examined the growth patterns of the cancerous cells, they found that the tumors were remarkably similar to human neuroblastomas: they contained cell markers typical of human tumors, and some grew in characteristic rosette shapes—features that did not often appear in tumors implanted in immunocompromised mice through xenotransplantation.

Having successfully induced neuroblastoma tumors in the chimeric mice, the researchers took the opportunity to examine the communication between immune cells and tumors—and specifically, how the tumors evaded destruction by anti-cancer immune cells called T cells. One factor that makes human neuroblastomas and many other cancers dangerous is their sophisticated strategy for avoiding being destroyed by T cells. "Cancer tricks the immune system," Cohen says. By activating chemical signals that exhaust the T cells, the tumors effectively weaken their attack. The tumors in the chimeric mice, Cohen found, use a similar method to human neuroblastomas to evade immune responses.

Cohen and others plan to test the new system's potential for modeling other cancers such as melanoma and to use it to investigate potential treatments for neuroblastoma patients. "The obvious next step is to study how the treatment of these tumors will allow these chimeric mice to be cured," he says. "This is a model that will allow us to approach not only how to get rid of the tumor, but also to fix the immune system and recover those exhausted T cells, allowing them to fight back and deplete the tumor." 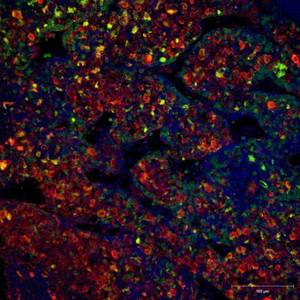 Why ICIs Have Revolutionized Cancer Care
UP NEXT...
HER3-Directed ADCs in Breast Cancer
CME