The combination of low muscle mass (LMM) and low muscle density (LMD) is associated with shorter survival in patients with diffuse large B-cell lymphoma (DLBCL), according to a study published online March 13 in Leukemia & Lymphoma.

Hánah N. Rier, from Albert Schweitzer Hospital in Dordrecht, Netherlands, and colleagues examined the association between LMM and LMD and survival in patients with DLBCL. A total of 164 DLBCL patients underwent computed tomography-based measurement of muscle prior to chemo-immunotherapy.

The researchers defined LMM or LMD as a Z-score less than −1, and they were linked to overall and progression-free survival. In 13 percent of DLBCL patients, the coexistence of both LMM and LMD was observed and was significantly associated with shorter overall and progression-free survival (multivariable hazard ratios, 2.42 and 2.16). Patients with LMM and LMD more often did not complete planned treatment (31.8 versus 13.6 percent) and were less likely to achieve a complete response (59.1 versus 81.7 percent).

"Patients with DLBCL have LMM and LMD compared to healthy counterparts. The combination of LMM and LMD is a negative prognostic factor for survival, independent of comorbidities and unfavorable lymphoma characteristics," the authors write. "This might result in the identification of possible roles for muscle measurements in drug dosing and treatment decision making." 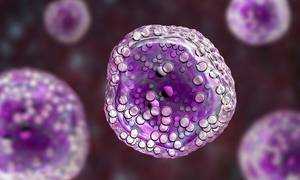