A top federal health official outlined a tight time frame on Wednesday if the Biden administration hopes to have new coronavirus vaccines by the fall that better meet the threat of a fast-evolving virus, saying clinical trials would have to be underway by next month in order to produce the shots.

Robert Johnson, the director of an infectious disease division within the Department of Health and Human Services, said vaccine manufacturers would need several months to produce hundreds of millions of doses of a reconfigured vaccine.

“If you’re not on your way to that clinical trial by the beginning of May, it is very difficult to have collectively across manufacturers enough product to meet that demand,” he told a meeting of an expert advisory committee to the Food and Drug Administration. Dr. Peter Marks, who oversees vaccine regulation for the F.D.A., also said the time frame was tightly compressed, with a possible decision needed by May or June.

The panel of outside experts grappled with what the U.S. coronavirus vaccine strategy should be for the rest of the year, amid growing evidence that new variants have eroded some of the existing vaccines’ power.

The meeting represents a kind of transition point for the federal governments. In their presentations, the experts outlined a landscape studded with uncertainties, starting with the basic question of how to modify the existing vaccines so they work better.

A number of clinical studies are already underway, conducted both at the National Institutes of Health and by vaccine manufacturers themselves. The trials are too small to give efficacy data of the type that first led to the authorization of the existing vaccines. But they could produce enough immune response data for federal health officials to determine whether a retooled vaccine will work better than current ones.

Expert after expert described how much guesswork is involved in trying to design a better vaccine at this point. No one knows which variant of the virus will dominate in the fall, when some consider a new surge highly likely. There is some chance another variant like Omicron will emerge that redraws the coronavirus picture in a wholly unexpected way — a factor that can be neither measured nor discounted.

Trevor Bedford, a biostatistician at the Fred Hutchinson Cancer Research Center, said thecoronavirus has been mutating at a pace that far exceeds that of the flu virus, for which vaccines are redesigned annually. While that pace may slow, the virus’s plasticity to date indicates it “is likely to keep on evolving,” he said.

Dr. John Beigel, a clinical research director at N.I.H, described a new study designed to compare how well Moderna’s existing vaccine works compared to modified versions aimed at the known variants, both alone and in combination. In an interview Tuesday, he said the existing vaccines might still turn out to be the best.

In the first stage, researchers are hoping to rapidly enroll 600 volunteers who have already been vaccinated and received a booster. Some will be given the existing vaccine. Others will get experimental vaccines targeted to Omicron variant alone as well as three other variations: Omicron plus the Beta variant, the Delta variant and the prototype virus that emerged first in the pandemic.

Dr. Beigel said that he hopes results may be ready by midsummer, although some federal officials are hoping for earlier.

Panelists also heard from Sharon Alroy-Preis, the director of public health services for Israel’s Health Ministry, who described Israel’s experience with administering a second booster for those ages 60 and older earlier this year.

Relying heavily on Israeli data, the F.D.A. last week authorized a second booster for Americans 50 and older, among other groups. The C.D.C. director, has recommended those shots for those 65 and older, and anyone ages 50 to 64 with serious underlying health conditions.

Some immunologists and vaccine experts, including at least one member of the F.D.A.’s expert panel, have said the federal government went too far with too little data.

Dr. James E. K. Hildreth, president of the Meharry Medical College in Tennessee, pointedly asked why the F.D.A. had convened the panel to discuss future vaccine policy but did not solicit its advice before deciding whether to authorize a second booster.

Dr. Marks said that the agency did not consider offering a second booster to be “a major expansion or a major change.” Jerry Weir, another senior agency official, said the F.D.A. expects to ask the advisory panel to review any reconfiguration of the existing vaccines before moving forward with emergency authorization. 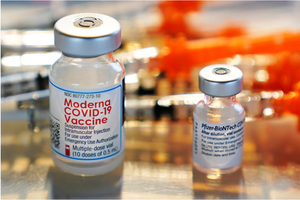