Affecting up to 4% of patients older than 65 years, atrial fibrillation ranks among the most common heart conditions. Described by health professionals as an "irregularly irregular" heart rhythm, episodes of atrial fibrillation continue to prove difficult to predict.

An international team of researchers, led by Boon Leong Lan, at Monash University Malaysia, has proposed a way to define cardiac state and has studied the dynamics of the state before the cardiac rhythm changes from normal sinus to AF rhythm and vice versa. The work, appearing in Chaos, and based on critical transition theory, looks to provide an early warning for those with paroxysmal atrial fibrillation with potential implications for future wearable devices.

"The flickering of the cardiac state could provide an early warning for the onset of paroxysmal atrial fibrillation for patients who are wearing a device that can measure the heartbeats accurately to monitor their cardiac state," said Lan. "This early warning would be useful if there is a medicine that the patient could take to prevent the onset."

It is not obvious how the cardiac state should be defined using just the electrocardiogram time series data. Lan said that their definition of the cardiac state, which is based on the changes between successive beat-to-beat intervals, was inspired by his previous work. He and his collaborator previously discovered that the distribution of the beat-interval changes can discriminate subjects with sustained atrial fibrillation from healthy ones very well.

Others have proposed that dynamical transitions in a host of different realms from climate to stock markets to medicine are preceded by critical slowing down as the tipping point is reached. In critical slowing down, the rate of recovery from even a small perturbation approaches zero.

Lan and colleagues found that critical slowing down did not precede the onset of atrial fibrillation.

Lan is optimistic their method of defining the state of a complex system can be adapted to study critical transition in other chronic episodic diseases, such as epileptic seizures, asthma and ulcers, and other complex systems like an electrical power system or climate system.

He and his group are currently studying the changes in the brain state before epileptic seizures using their approach. 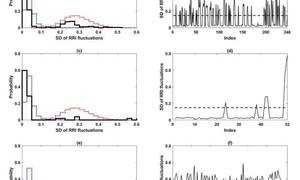