In the United States, colon cancer is the fourth-most common cancer and second-leading cause of cancer-related deaths. Previous studies have shown that eating green vegetables and fiber reduces risk of colon cancer by as much as half. This new study, recently published in the journal Gut Microbes, explores the relationship between spinach, gut health, genes and colon cancer outcomes.

The researchers used a model of a hereditary disease called familial adenomatous polyposis, an inherited disorder that causes young people to develop multiple noncancerous growths (polyps) in their colon. Most people with this disease must have their colon surgically removed to prevent hundreds of tumors from growing in their colon as they age. They then undergo often-toxic NSAID treatment to prevent additional tumors from forming in the duodenum, the first part of the small intestine. The results of this study indicate spinach might aid in cancer prevention in these patients by delaying the need for colon removal and prolonged drug treatment.

After feeding freeze-dried spinach to an animal model of familial adenomatous polyposis for 26 weeks, the researchers observed significant antitumor activity in the colon and small intestine. Using an unbiased approach called multi-omics, the researchers found that the tumor suppression by spinach involved increased diversity in the gut microbiome (helpful microbes) and changes in gene expression to help prevent cancer. They also found that fatty acids associated with regulation of inflammation, called linoleate metabolites, were brought to up to a beneficial level after a spinach diet.

"We believe eating spinach can also be protective for people who do not have familial adenomatous polyposis," said principal investigator Roderick Dashwood, director of the Center for Epigenetics & Disease Prevention at the Texas A&M Health Institute of Biosciences and Technology.

Hereditary forms of colon cancer only account for about 10 to 15 percent of cases. The majority of colon cancers are sporadic, meaning they are not driven by a genetic predisposition inherited through a family. Dashwood explains that over decades, exposure to carcinogens through diet and environment can change the way genes are expressed in the gastrointestinal (GI) tract, and this can cause people to develop polyps in the colon and lower GI tract later in life that can progress into cancer. This is why the American Cancer Society recommends starting colon cancer screening at age 45.

Dashwood's lab previously noticed the benefits of spinach in a carcinogen-induced model of colorectal cancer that mimics sporadic cases. In that model, spinach was very effective in preventing polyps, which spurred the team to see how spinach might work in colon cancer driven by genetics.

"My bias was to focus on the chlorophyll story because of my long history examining anti-cancer effects of chlorophyll," Dashwood said. "But it turned out the multi-omics approach prompted other ideas. When we looked at the metabolomic data, there was no chlorophyll. It was actually fatty acids and linoleic acid derivatives that were causing the beneficial effects."

Multi-omics allows scientists to carefully analyze biological "big data" to find associations between different systems in the body, pinpoint biomarkers and better understand the complex interrelationships that drive life. Instead of traditional hypothesis-driven research, multi-omics is a hypothesis-generating approach in which scientists follow the data to land at explanations for results. The three omics used in this study were microbiome (helpful and harmful microbes), transcriptome (gene expression) and metabolome (metabolites, such as amino acids and fatty acids). The word "omics" comes from the "ome" in these words.

To crunch the metabolome data, Dashwood's team utilized the Integrated Metabolomics Analysis Core facility established by Arul Jayaraman at the Texas A&M College of Engineering. First author of the study, Ying-Shiuan Chen, worked closely with Jayaraman and his team for two years to analyze the hundreds of samples collected from the study's models.

"This is one of the most comprehensive metabolomics analyses of its kind, especially in the context of cancer prevention by a whole food, spinach," said Jayaraman, Ray B. Nesbitt Endowed Chair, Presidential Impact Fellow and head of the Artie McFerrin Department of Chemical Engineering at the College of Engineering. "This work was possible due to generous support from the Research Development Fund and Texas A&M System Chancellor Sharp for establishing the Integrated Metabolomics core."

The next step for Dashwood's team is to validate some of the metabolomic aspects of their findings, such as concentrations of linoleic acid metabolites and short chain fatty acids with anticancer effects on the preclinical model, and ideally in human patients.

When it comes to how soon people should start adding spinach into their diet to help prevent colon cancer, it doesn't hurt to start now.

"The sooner the better," Dashwood said. "You shouldn't wait until polyps arise in order to start to do these sorts of preventive things." 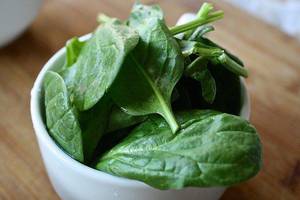 Breast Basics 101: What Every Woman Should Know About Breast Cancer Risk, Screening, & Detection
UP NEXT...
Assessing Advancements in Treatment Options for Small Cell Lung Cancer
CME