With COVID-19 cases still surging, the nation is heading toward what health officials fear to be a “critical and dangerous time” -- battling the deadly virus and peak flu season. Now, researchers are pushing forward to find a better way of protecting vulnerable populations than with a yearly flu vaccine, which may not always be effective against the current viral strains.

Scientists have been scrambling to create an injection that can be one-and-done without the hassle of having to revaccinate the population on a yearly basis. Researchers, under the lead of Dr. Florian Krammer, a professor of vaccinology at the Icahn School of Medicine at Mount Sinai, hope they’ve discovered the first sign of progress, according to a study published Monday in the journal Nature Medicine.

Krammer’s team of researchers are designing an injection that covers a broader range of virus strains that may no longer require yearly revaccinations.

“We are developing a vaccine so that we can provide more breadth of protection,” Dr. Adolfo Garcia-Sastre, director of the Mount Sinai Health and Merging Pathogens Institute and co-author of the study, told ABC News.

The current flu vaccine boasts an efficacy rate of 40% to 60% but this is only if the vaccine matches the current viral strains, which change every year. The vaccines are developed based on what scientists predict will be the next year’s batch of viral strains, leaving us a step behind one of the nation’s top killers and leaving our most vulnerable without adequate protection when scientists don’t get it right.

Krammer and his team of researchers have now designed a vaccine that tries a new approach. The outside of the flu virus is covered in tiny proteins, which scientists use to create “targets” for their vaccines. Krammer is trying to design a vaccine that would take aim at the stalk-end of the protein. Unlike the head, the stalk of the hemagglutinin protein is nearly the same across viral strains. If the vaccine proves to be effective, it would be touted as the first universal flu vaccine.

“They are one step closer to a universal type of vaccine that is strong, broad, and durable,” said Dr. Todd Ellerin, head of Infectious Disease at South Shore Health, who was not involved in the research.

The flu costs the nation over $10 billion a year and is traditionally one of the top 10 causes of death among people 65 years or older.

A universal flu vaccine that requires one or two injections over a person’s lifetime would reduce costly visits to the doctor’s office for yearly shots.

“The virus changes all the time and we are not that good at predicting how it will change,” said Krammer. This universal vaccine, however, would “replace the seasonal vaccine so you would only get one or two shots, and maybe a booster here and there,” he added.

Krammer’s vaccine has so far completed Phase 1 of clinical trials that test the vaccine’s safety and ability to stimulate the immune system. So far, the vaccine has proven to be safe with side effects similar to those seen with the traditional injection: transient muscle aches and pain at the injection site.

The Phase 1 trial did not test for the vaccine’s efficacy but it did give scientists a better sense of which type of vaccine might work best. By analyzing blood samples from the volunteers, Krammer and his colleagues realized that one version of their vaccine, called an “inactivated” or “killed” form of the virus, was likely to work. Another version of the vaccine, called a “live-attenuated” virus, did not seem to work as well as the killed version.

“The current live-attenuated vaccines are not as great as we initially thought,” said Dr. Walter Orenstein, associate director of the Emory Vaccine Center. But he's still encouraged by the data because "the inactivated vaccine gets protection against both transmission and infection,” he said.

Krammer’s team plans to move forward with the inactivated form of the vaccine to Phases 2 and 3 – larger clinical trials that test for vaccine efficacy and safety.

“The data suggest that immune response against the virus [from the vaccine] will be protective. We need to get to Phases 2 and 3 trials to look at this, but I find the data promising,” said Orenstein, who was not involved in the study.

There are still many questions that will need to be answered before everyone can get this flu vaccine. But a vaccine set to last for years to life would also be a welcome gift to more disadvantaged parts of the world where yearly shots are a huge financial burden.

“You won’t have to be worried about endemics anymore. That is something very positive. Maybe something that can really become reality,” said Krammer. 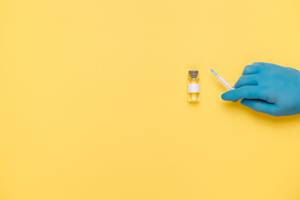