The Food and Drug Administration on Monday gave full regulatory approval to the COVID-19 vaccine produced by Pfizer and BioNTech, making it the first coronavirus vaccine in the United States to receive the agency's highest mark of approval.

The FDA, as expected, announced the approval of the shot about eight months after it issued emergency use authorization, a step that allowed people in the United States to begin receiving the vaccine.

"The FDA's approval of this vaccine is a milestone as we continue to battle the COVID-19 pandemic," Acting FDA Commissioner Dr. Janet Woodcock said in a statement. "As the first FDA-approved COVID-19 vaccine, the public can be very confident that this vaccine meets the high standards for safety, effectiveness, and manufacturing quality the FDA requires."

Woodcock noted that the approval means the vaccine meets "rigorous scientific standards" that were also required for emergency authorization in December.

Millions of unvaccinated people in the United States have cited the lack of full FDA approval as a factor in their decision not to receive the shot.

"We recognize that for some, the FDA approval of a vaccine may now instill additional confidence to get vaccinated. Today's milestone puts us one step closer to altering the course of this pandemic in the U.S.," Woodcock added.

Pfizer's vaccine was the first to be distributed in the United States and was shown to be better than 94% effective against the virus that causes COVID-19. Scientists are still testing the vaccine, as well as others from Moderna and Johnson & Johnson, to see how well it guards against mutated strains like the Delta variant.

Some authorities have said the Delta variant has driven a resurgence of cases in the United States and other countries, in part, due to those who have refused to be vaccinated.

The FDA said in its announcement that the Pfizer vaccine will now be marketed under the name Comirnaty. The full approval applies for all persons to receive the shot over the age of 16. Children between 12 and 15 can also receive the vaccine under the FDA's emergency authorization for that age group. 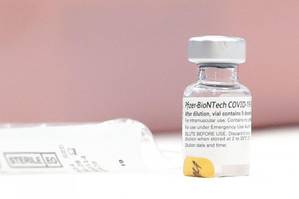