As people around the world are learning to live with a new phase of the COVID-19 pandemic, researchers from UConn’s College of Agriculture, Health and Natural Resources, in collaboration with Spanish institutions, have learned valuable lessons about the role social media played during pandemic lockdowns.

In a recently published study in the International Journal of Environmental Research and Public Health, Aviana Rosen a Ph.D. candidate in the Department of Allied Health Sciences, and Tania Huedo-Medina, associate professor of biostatistics, share their findings about social media usage in Spain during the first year of the COVID-19 pandemic.

They found social media use increased across all groups of Spanish adults as it served as a form of social support during a time when people were prohibited from seeing friends and family in-person, and from participating in their regular habits or hobbies for stress relief.

The researchers’ findings contrast many of the negative ways social media is typically used in the U.S., spreading misinformation and encouraging people to compare themselves to carefully selected and curated images of others, damaging their self-esteem and creating unrealistic expectations.

“How social media is used can have impactful effects on mental health,” Huedo-Medina says. “We really need to develop stronger strategies and policies for a healthy social media use, among other aspects to help us to positively interact with each other when we cannot do it in person”

The researchers initially set out to study people’s mental health during the lockdown in Spain in April 2020, including the aspect of social media use as an important element of everyday life. The qualitative portion of the study showed an interesting and recurring pattern in the interviews related to an increased use of social media.

This inspired the researchers to focus on looking at social media use during the COVID-19 lockdowns more closely.

“Even though none of our interview questions directly addressed or asked about social media use, participants brought it up over and over again, so we decided to analyze the interviews and see what effect social media was having on people,” Rosen says.

“People were using this in Spain to bond with their family and friends all day long, starting from virtual breakfast on video calls with family, to learning and testing new recipes virtually with other family members for dinner,” Rosen says.

The researchers developed a questionnaire and re-surveyed a portion of the original sample in April 2021.

The most significant increases were in females and 18-24 year-olds, regardless of sex.

The researchers say they are interested in continuing this study to better understand this pattern and why certain groups have suffered greater mental health problems during the pandemic despite most gravitating toward social media.

Rosen says the increase among young people may be because many of these individuals had their lives disrupted in a way they never had before.

“I think that was a hard adjustment for a lot of them,” Rosen says. “That generation has not lived through anything like this.”

Women have also tended to suffer more during the pandemic as caring for dependents including children or elderly relatives, and household responsibilities often disproportionately fall to them.

“In a male-dominated society, women need to fight harder to gain the same benefits as men,” Huedo-Medina says. “The pandemic added another level of challenges to gender equality.”

The research team has received approval to continue the study for a third year. They are hopeful that their results could help pave the way for the development of interventions to help people use social media in a more positive way that facilitates social support and connectivity, and engagement in healthy behaviors.

“Social media doesn’t have to be something that’s harmful, it can be something really good,” Rosen says. “It can be a helpful tool for people of all ages.” 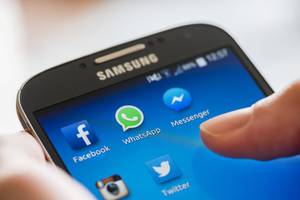