Results showed that a 5% increase in the number of families receiving SNAP benefits reduced a state’s CPS and foster care caseloads between 7.6% and 14.3%.

“We knew that SNAP had an important role in alleviating food insecurity and hunger among children,” said Michelle Johnson-Motoyama, lead author of the study and professor of social work at The Ohio State University.

“Our findings suggest that investments in SNAP may be of even greater value to the health of children than we knew.”

The study was published today (July 13, 2022) in the journal JAMA Network Open.

About 37% of U.S. children experience a CPS investigation in response to a referral for child maltreatment by their 18th birthday. More than 250,000 children enter foster care each year.

The findings should be of particular interest to state policymakers who are concerned about budgets, Johnson-Motoyama said.

“The costs of having children involved with CPS and placing them in foster care are tremendous,” she said.  “Providing people with nutrition benefits is far less expensive and can save states quite a bit of money.”

The results are especially relevant now, as a federal COVID-19 emergency declaration boosting SNAP benefits is set to expire this month.  If the declaration does expire, about 700,000 low-income households in Ohio alone will see cuts in SNAP benefits.

“That could add a lot of stress to families with limited resources who rely on the program to help provide meals.  Our study suggests that could harm children and increase the workload of CPS workers,” Johnson-Motoyama said.

The researchers conducted a statistical analysis that examined how state SNAP policies were related to CPS and foster care outcomes over time, from 2004 to 2016.  They used data from the SNAP Policy Database, SNAP State Options Reports and the National Child Abuse and Neglect Data System for all 50 states and the District of Columbia.

The federal government funds SNAP benefits, but states have a lot of discretion in how they implement the program and determine eligibility, Johnson-Motoyama said.

For example, there are a variety of SNAP policies that states can choose to implement. One is broad-based categorical eligibility, which enables states to raise income eligibility limits somewhat so that low-income working families can still qualify. Others include offering transitional benefits to households who are leaving the Temporary Assistance to Needy Families (TANF) program and excluding child support payments from income limits.

The researchers examined how many SNAP-related policies states implemented and determined that states with more policies that increased eligibility had fewer kids involved in CPS and foster care.

“We found that the number of policies implemented had cumulative effects beyond any individual policy effect,” Johnson-Motoyama said.

“So the more generous states were, the bigger impact they had in reducing CPS and foster care caseloads.”

A higher state count of income generosity policies reduced the number of child maltreatment reports accepted for CPS investigation by 352 per 100,000 children – from 557 to 158 per 100,000.

“That’s a large reduction in potential child maltreatment. We were particularly surprised by how robust the findings were to other potential factors that could have explained these effects,” she said.

“Even when we took into account factors like the impact of the opioid epidemic and the impact of other safety net programs in states, we still saw that the SNAP policies had powerful effects.”

That may be driven by families who leave the TANF program involuntarily, because they have exhausted the benefits available to them.

“The financial stress of no longer having TANF benefits, particularly if parents are unemployed, may increase risks linked to child maltreatment,” she said. “SNAP benefits can alleviate some of that pressure.”

Overall, the results indicated that SNAP policies worked to reduce CPS and foster care involvement by making more people eligible for the program and expanding the number of people receiving benefits.

“What this suggests to policymakers is to pay greater attention to increasing access to SNAP benefits,” Johnson-Motoyama said.

“This is compelling evidence that improving food security for vulnerable families is good for children and is fiscally responsible for states.”

The study was supported by the Centers for Disease Control and Prevention. 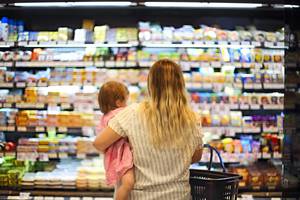