Speed of test results and frequency of testing are paramount for effective COVID-19 surveillance, suggests a new study that modeled trade-offs in test sensitivity, test frequency, and sample-to-answer reporting time, in select scenarios.

Test sensitivity is secondary to these factors in the scenarios studied, the authors say. "If the availability of point-of-care or self-administered screening tests leads to faster turnaround time or more frequent testing, our results suggest that they would have high epidemiological value," Daniel Larremore and colleagues write.

Because SARS-CoV-2 can spread from individuals with pre-symptomatic, symptomatic, and asymptomatic infections, diagnosis, and isolation based on symptoms alone won't prevent spread. Rather, robust population screening, for which virus testing is often central, will be critical.

However, related surveillance testing programs must make concrete choices, including: What are the tradeoffs between cost, frequency, test sensitivity, and the speed with which diagnoses can be returned?

To evaluate this, Larremore and colleagues modeled how changing viral load (different levels of infectiousness) impacted the ability of an assay, or test, to diagnose infection. They calculated what percentage of these people's total infectiousness would be removed by screening and isolation, using different testing approaches.

They also evaluated the impact of surveillance at the population level using two epidemiological models that incorporated viral load dynamics, one of which mimicked aspects of the contact structure of New York City.

Across their analyses of individuals and populations, the inclusion of viral load in surveillance modeling revealed that the limits in detection abilities of tests mattered less than previously thought, the authors say. But delays in returning diagnoses were highly impactful, with even one-day delays between sample and answer undercutting otherwise impactful surveillance plans.

As well, the frequency of surveillance testing plays a crucial role, the authors say. They note that communities vary in their transmission dynamics, so specific strategies for successful population screening will depend on the current community infection prevalence and transmission rate in a given location. They also identify other limitations in their study.

Still, they say their findings could aid some groups planning societal reopening, refocusing their efforts on rapid turnaround times instead of highly sensitive tests. They may also inform regulatory agencies and test manufacturers about the importance of developing and approving such tests, optimized for surveillance (as opposed to clinical diagnosis). 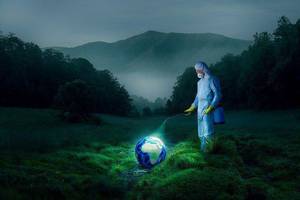 Enhancing the Patient Colonoscopy Journey: Factors That Can Influence the Patient Experience
UP NEXT...
Counseling Strategies in NSCLC Care: Helping Patients Cope with a Diagnosis
CME