Fish are an important source of micronutrients and essential fatty acids which have the potential to substantially reduce rates of malnutrition and its associated health conditions, which include maternal mortality, stunted growth, and pre-eclampsia.

However, this new study, the first of its kind and six years in the making show that foreign fishing (fleets fishing in foreign waters) and international seafood trade exacerbate nutrition insecurity, taking fish away from the waters of nations experiencing a high prevalence of malnutrition and diverting the catches predominantly to wealthier countries.

There has been vigorous debate focused on international fish trade and foreign fishing as driving unequal distribution of fish and their economic return. However, their impact on the supply of nutrients to local populations was unknown, until now.

The international team of researchers analyzed global fish catches, trade and nutrient composition (calcium, iron, selenium, zinc, omega-3, vitamin A and protein) for global marine fisheries. The research team used a model previously developed by this study's Principal Investigator, Professor Christina Hicks of Lancaster University. This enables detailed calculations of nutrients based on fish species within fisheries' catches, rather than simply the amount of fish caught.

They found that more than 60% of countries receive net gains in fish-derived nutrients through international trade—Nigeria, France, Japan and Italy gaining the most.

Around a third of nations have net trade losses of nutrients. While this includes a few prominent exporters such as China and Russia—more than half of the nations losing fish-derived micronutrients are vulnerable to small island states and African nations, such as Namibia and the Maldives.

While trade drives significant nutrient flows among nations, the study's findings suggest that foreign fishing fleets taking catches from the waters of other nations may be a more important cause of fish-derived nutrients not reaching vulnerable people. Their findings suggest foreign fishing relocates one and a half times more nutrients than international trade in fish.

These findings add to concerns about agreements allowing foreign fishing fleets to fish in low and middle-income nations—highlighting that such agreements reduce nations' ability to direct their own food production toward citizens experiencing nutritional insecurity.

Dr. Kirsty Nash, lead author of the study, said: "The findings suggest that when nutritional differences among fish species and nations' nutritional needs are considered, distributions of fish supplies through foreign fishing, and amplified by international trade, may be undermining nutritional food security and international equity."

"Marine fisheries hold the unrealized potential to help address global nutrient deficiencies but we need to harmonize fisheries, health and trade policies to ensure nutrients reach people vulnerable to undernutrition. And decision-makers must consider nutrients derived from fisheries as a key resource that needs protection."

Professor Christina Hicks of Lancaster University said: "Nutrient insecurity is a pressing global concern and fisheries have the potential to reduce the health burden of malnourishment. However, our analysis shows that foreign fishing fleets and international trade contribute substantially to the broad-scale redistribution of fish from the waters of the countries where they are caught and, in many cases, away from where the people who most need these vital micronutrients.

"This research highlights that there is a need for greater transparency around the distribution of fish, and around the practice of foreign fishing fleets. And if fisheries are to achieve their potential to reduce global malnutrition and the terrible health consequences associated with it, then nutrition security needs to be considered more centrally when countries develop international trade agreements."

In addition, the researchers developed a novel "nutritional vulnerability framework" that shows that the few small island developing states and African nations that are benefitting from trade and foreign fishing currently are also among the most vulnerable to future changes in nutrient supplies, through changes in trade and foreign fishing practices.

The researchers also modeled the effects of climate change, which is predicted to lead to overall declines in fisheries production. This evaluation exacerbates the nutrient vulnerability of many nations, with the greatest impacts on tropical countries and small island states such as Papua New Guinea and Guyana.

The study's findings are outlined in the paper "Trade and foreign fishing mediate global marine nutrient supply," which has been published by the Proceedings of the National Academy of Sciences (PNAS) 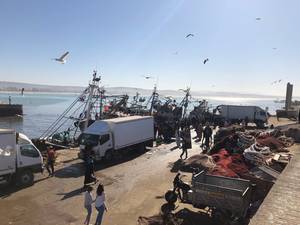