Micrometer-sized gel drops can provide the extracellular architecture needed for cells to grow and proliferate. The cell-carrying gels, made of self-assembling ultrashort peptides that form supportive nanofiber networks, might be injected into ischemic tissue in need of revival with new blood vessels.

"Our microgels are unique because they are made of only four amino acids, which is the shortest self-assembling peptide used to fabricate microgels so far," says KAUST bioengineer Charlotte Hauser, who led the study. "This ultrashort structure reduces the cost and time for peptide synthesis."

Scientists have been experimenting with various approaches for making human-like tissues that can be used for regenerative therapies. Self-assembling ultrashort peptides have an advantage over other materials because they can come together to form an architecture similar to that which supports cells in living tissue. They can also be made from chemically synthesized peptides that do not cause immune rejection by the body and are easily modified and upscaled for mass production.

Hauser and her team had been investigating the fabrication of microgels using self-assembling ultrashort peptides made of three and six amino acids. But they were struggling to optimize the gelling process that encourages the peptide networks to form into suitably shaped and sized droplets.

So they experimented with peptides made of four amino acids. Then most promising peptide was made by linking together the amino acids isoleucine, valine, phenylalanine and lysine, followed by adding an acetyl group to one end and an amide group to the other. Many of these peptides are put in an aqueous solution where they link together in a specific fashion that ultimately forms a fibrous network.

The fiber-containing solution is put through a microfluidic device containing oil, salt and detergent. As the solution moves through the device, it becomes a gel and is broken into droplets.

The droplets are stiff, elastic and strong, and retain their shape and size even when exposed to sterilization, ultraviolet radiation or agitation.

The team successfully grew blood vessel endothelial cells on the droplet surfaces. These cell-loaded microgels were injected into a bulk hydrogel made of the same ultrashort peptides that also contained fibroblasts, a type of cell involved in wound healing. Next, the already proliferating endothelial cells extended radially from the microgels and branched into tubular blood vessels.

This will require much research. The team will test substances for new microgel properties as well as seek ways to add biological cues to the microgels that can trigger the formation of blood vessels, nerve fibers or bone tissue. They are looking into ways to make the microgels even softer so they can harbor cells on their insides. Finally, they aim to test their microgels for treating ischemia in mice. 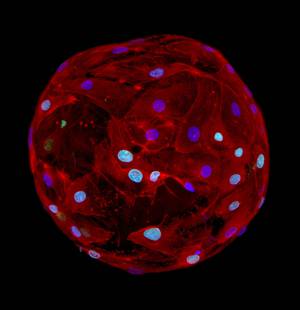 Not Quite a Cancer Vaccine: Selling HPV & Cervical Cancer
UP NEXT...
Components to a Comprehensive Lung Cancer Screening Program
CME