In a study of more than 80 men and women from Baltimore, Maryland, Johns Hopkins researchers have added to evidence that COVID-19 booster shots are essential for maintaining long-term immunity against infection, particularly among older adults.

A previous study documented a significant decline in protective antibody response among all vaccine recipients six months after an initial two-dose series of mRNA vaccines, particularly in older adults whose immune systems weaken with age and respond less efficiently to viral and bacterial infections. These previous studies also showed a sharper decline in immune response in men compared with women in adults over 74 years.

During clinical trials of the mRNA COVID-19 vaccines prior to approval by the U.S. Food and Drug Administration, antibody response was shown to be high in older adults, conferring robust protection against infection and hospitalization. However, continued monitoring of these individuals showed a decline in antibodies after six months.

For the new study, investigators at Johns Hopkins Medicine tested COVID-19 antibody levels in blood samples from more than 80 adults ages 75–98 who had two initial doses of the mRNA vaccines made by either Pfizer or Moderna and no known history of COVID infection.

As a comparison group, researchers also tested the blood of 84 adults under 75 years old with the same vaccination and infection history.

However, when blood samples were again taken and tested 14–30 days after a booster shot, antibody levels for older adults matched those in the younger group. A third dose also eliminated disparities between males and females within the same age group.

“The data support the CDC guidelines for COVID-19 vaccination and affirm that the vaccine is initially able to mount a good antibody response,” says Sean Leng, M.D., Ph.D., a professor of medicine who specializes in geriatric medicine at the Johns Hopkins University School of Medicine. But, he adds, older people need to be especially encouraged to get the vaccine and boosters to keep them protected from breakthrough infections as immunity wanes.

Leng says the study also underscores the importance of continued research on factors that may affect immunity, such as type of vaccine, age, sex and frailty. 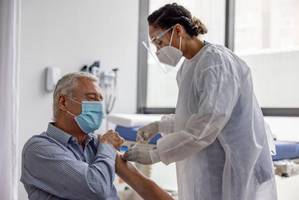