Newswise — Mobile apps make it possible to track everything from exercise and calories to blood pressure and blood sugar, and use the information to stay on target with health goals or manage a chronic condition.

But a new poll shows that most people over age 50 aren’t using such apps – and that those who might get the most help out of them are less likely to actually use them.

Less than half (44%) of people aged 50 to 80 have ever used a health-related app on their smartphone, wearable device, or tablet, according to the new findings from the National Poll on Healthy Aging.

Those who say they are in poor health, and those with lower incomes or levels of education, were far less likely to have ever used such apps. Half of those who haven’t ever used a health app, or have stopped using them, said they are not interested in using them.

The percentage of older adults who currently use at least one app is even smaller, at 28%. One-third of this group uses an app to track exercise, while smaller percentages use apps to track sleep, weight, nutrition, blood pressure, to guide meditation, or to manage mental health and stress. One-quarter of current users have shared information from their apps with their health care providers.

And among older adults who have diabetes, just 28% use an app on their device to log their blood sugar levels and 14% use an app to log their medications. But nearly half of older people with diabetes say they would be interested in using an app in both of these ways.

The poll is based at the University of Michigan Institute for Healthcare Policy and Innovation and is supported by AARP and Michigan Medicine, U-M’s academic medical center.

“Now that most older adults have at least one mobile device, health-related apps can provide an opportunity to support their health-related behaviors, manage their conditions, and improve health outcomes,” said Pearl Lee, M.D., M.S., a geriatrician at Michigan Medicine who worked on the poll report.

Lee and co-authors James Aikens, Ph.D., and Caroline Richardson, M.D., both of the U-M Department of Family Medicine, say the potential is especially important for older adults with diabetes.

The poll also included questions about continuous glucose monitors, which people with diabetes can wear on their skin to monitor their blood sugar over the long term. Such monitors can connect with mobile devices to feed readings into an app.

Only 11% of the poll respondents who have Type 2 diabetes said they currently use a CGM, though another 68% had heard of such devices and over half of them said they would potentially be interested in using one.

Disparities in app use

Recent data show that 83% of people aged 50 to 64, 61% of people over age 65, own a smartphone, and just under half of the people in each age group own a tablet device. That’s up from 34% of 50-64-year olds and 13% of those over 65 having a smartphone a decade ago, and even lower percentages having tablets at that time.

Despite this rise, the poll highlights disparities in the use of mobile health apps by income and education level, as well as age. It also shows that lack of awareness or mistrust of the security of health apps may be holding many older adults back.

Poll director Preeti Malani, M.D., an infectious disease physician with training in geriatrics at Michigan Medicine, notes that older adults with incomes over $100,000 were nearly three times more likely than those with incomes under $30,000 to use health apps, at 43% vs. 15%. Those with college degrees were more than twice as likely to use health apps as those who had not completed high school.

“People who describe their health as fair or poor – the people who might be most in need of the kind of tracking, support, and information a good health app can give – were significantly less likely to use such apps than those who say they’re in excellent, very good or good health,” Malani notes. “Health providers should consider discussing the use of health apps with their patients because one-third said they had never thought about using one.”

The poll report is based on findings from a nationally representative survey conducted by NORC at the University of Chicago for IHPI and administered online and via phone in August 2021 among 2,110 older adults aged 50–80. The sample was subsequently weighted to reflect the U.S. population. Read past National Poll on Healthy Aging reports and about the poll methodology. 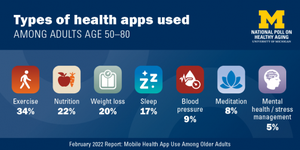 From Silent Killer to Treatable Disease: Improved Detection Methods for Ovarian Cancer
UP NEXT...
Primary HPV Screening & Genotyping in a 26-Year-Old Woman
CME