Hospitals are working to spike a provision in the COVID-19 pandemic response bill that would require them to shield nurses from exposure to the novel coronavirus because of what it describes as a “severe lack” of protective equipment.

The American Hospital Association called on its supporters in an alert Thursday to urge Speaker Nancy Pelosi, D-Calif., and other Democrats to withdraw workplace safety standards from a second package in response to the coronavirus pandemic. CQ Roll Call obtained a copy of the alert.

The tussle pits the hospital lobby against nurses' unions that are raising alarms about a diminishing stock of protective equipment and the possibility that some nurses could become severely ill and die without it.

AHA says surgical masks are an adequate substitute when a supply of N95 respirators is not available, citing the Centers for Disease Control and Prevention's recent decision to relax its own guidelines.

The hospital lobbying organization, which includes approximately 5,000 hospitals in its membership, said in its alert that the workplace safety rules “would be impossible to implement in hospitals due to a severe lack of N95 masks.”

“It is unfortunate that the American Hospital Association is encouraging its member hospitals to adopt minimum rather than optimum standards to protect patients and the doctors, nurses and other staff who care for them. In the face of an exploding global pandemic, running backward is the worst approach the health care industry, and the CDC, should take,” said Bonnie Castillo, executive director of National Nurses United, the largest U.S. nurses' union.

AHA didn't immediately respond to a request for comment.

The union says not having rules mandating N95s could hasten the spread of the virus.

The stimulus bill proposed by Democrats would require employers to protect nurses, doctors, orderlies and other hospital employees from occupational exposure to the novel coronavirus that causes COVID-19. Democrats say they want hospitals to be legally required to follow something similar to the CDC guidelines on preventing the transmission of infectious diseases developed after the SARS outbreak in 2003.

Outbreaks in health care settings were a “striking feature” of that earlier epidemic, according to the CDC guidelines.

The bill calls on the Occupational Safety and Health Administration to issue an "emergency temporary standard" within one month requiring employers to develop infection-control plans modeled after those CDC guidelines.

Other workplaces deemed “high risk” by CDC and OSHA, like airports, could be required to develop occupational safety standards based on those guidelines, too. Two workers screening passengers at Los Angeles International Airport contracted COVID-19 on the job while wearing surgical masks, Reuters reported this week.

A coalition of unions led by the AFL-CIO have petitioned OSHA to issue legally binding rules intended to prevent workers from exposure to the virus.

Experts in labor law say congressional action is necessary because OSHA is unlikely to act independently. And some hospitals could be unprepared for infection control without clear federal mandates.

“This work is already being done in some big hospital chains, but some hospitals won't know what to do and will fly by the seat of their pants,” said Debbie Berkowitz, a director at the National Employment Law Project, a nonprofit that advocates for more workplace regulations. “OSHA is an embattled agency and won't do this on their own. Congress needs to tell them to do it.”

Congressional aides say it is uncertain whether the provision will make it into the final deal.

Central to the tussle is a debate over whether surgical masks are adequate when treating COVID-19 patients. Both sides acknowledge the stock of N95 respirators, which can filter out airborne viruses while surgical masks cannot, could soon become depleted.

“COVID-19 by all current evidence is droplet and contact spread, and thus does not require N95 respirators during routine interactions between health care providers and patients,” the AHA lobbying alert reads.

“If this provision were to be enacted, hospital inpatient capacity would be dramatically reduced,” its lobbying materials say.

Nurses' unions say they worry that relaxed standards are being driven by the shortage of protective equipment rather than science. While it’s not clear whether COVID-19 can be transmitted through the air, an early study that has not been subject to peer review conducted in part by the National Institutes of Health found that the virus can survive in the air.

“COVID-19 is a novel virus. That means there’s a lot we don’t know. That means health care workers need the highest level of protection,” National Nurses United industrial hygienist Jane Thomason said in a conference call with nurses across the country on Thursday. “We can always take layers off as we go as we learn more, but we cannot go back and add protections after the fact.”

There was a debate about whether N95 masks were necessary during the SARS epidemic, which led to many health care workers becoming infected and some deaths, according to the SARS Commission report.

Food and Drug Administration Commissioner Stephen Hahn said in an interview with CQ Roll Call on Wednesday that the administration would be “transparent with the American people” about its stock of N95 respirators on the FDA website.

The National Strategic Stockpile has 13 million masks in stock, according to spokesperson Stephanie M. Bialek. The federal government will soon purchase 500 million more N95 respirators, but bids to supply them from companies are not due until Wednesday.

The debate over safety in hospitals touches on wider issues about the spread of COVID-19, according to epidemiologists, especially as hospitals are likely to be slammed with a surge in patients as cases increase.

“It is more important to keep health care workers safe than to worry about who they would infect. This is especially true for hospitals and point-of-care facilities where staffing may be a problem,” said Durland Fish, professor emeritus of epidemiology at the Yale School of Medicine. 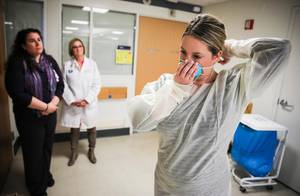