Alzheimer’s disease is among the fastest-growing and most deadly diseases. What’s worse, there are currently no effective treatments or therapies to stop or reverse it and it’s commonly thought that cognitive function inevitably declines as we grow older.

It makes sense, then, that so many people feel a powerless kind of fear when pondering their cognitive futures. A big question mark looming out there beyond age 65: “Will I get it, or will I be lucky?”

Happily, according to leading brain scientists, luck has little to do with it for most people.

While there is no cure for Alzheimer’s disease, and an estimated 3% of all cases are entirely genetic, recent research suggests that some lifestyle interventions could slow its progression.

Dr. Dean Sherzai, a clinical neurologist and co-director of the Brain Health and Alzheimer’s Prevention Program at Loma Linda University in California, has developed a five-component lifestyle intervention therapy he uses with patients.

“We have people coming to us with early signs, or so-called subjective impairment, and then we have people a little more advanced, classified as having mild cognitive impairment, or MCI,” Sherzai explained. “We give them interventions, give them advice on changes they can make to their lifestyle components and we look at what happens.”

Also see: Can lack of sleep lead to dementia?

Of the five components in Sherzai’s lifestyle intervention, exercise is the one he typically recommends implementing first.

“Whenever we apply behavior change to a population, we’re looking to create sustainable habits with small successes people can see right away, and nothing is better than exercise. It’s easy to implement, measurable and precise, with a fast return,” Sherzai said.

After only a few weeks of regular exercise, his patients often feel better, get better sleep and their lipid and blood glucose profiles improve. Sherzai explained that these are some of the indirect ways exercise reduces risk for Alzheimer’s, because each of those factors are associated with higher rates of the disease.

What type of exercise is best for brain health?

While brain scientists agree that exercise is good for preventing cognitive decline, they don’t yet know if any one type is better than another, but it’s something scientists are starting to research. For now, multiple studies have shown that both aerobic and resistance training have major cognitive benefits.

Sherzai recommends exercises involving the legs, whether that's walking, running, cycling or weight lifting, because, “your legs — not the heart — are the largest pump in the body.”

In a study published in July 2021 in the Journal of Applied Physiology, brisk treadmill walking at moderate-to high-intensities was shown to improve performance on memory tests of participants previously classified with MCI, aged 55 to 80.

Tsubasa Tomoto of the Department of Neurology at the University of Texas Southwestern Medical Center in Dallas, led the research on this yearlong study, which focused on the vascular function of the brain before and after the exercise intervention.

“We showed that the aerobic training improved cerebral vascular motor reactivity (CVMR), whereas stretching (the control in this study) had no effect. That improved CVMR also correlated to improvement on more memory scores,” said Tomoto.

The Texas study used moderate- to high-intensity continuous exercise to achieve the results, but other studies have shown positive outcomes with High-Intensity Interval Training (HIIT) and resistance training as well.

In fact, a 2020 Australian study published in the journal NeuroImage: Clinical showed six months of resistance training not only resulted in improved cognition, but protected a region of the brain particularly vulnerable to Alzheimer’s disease for up to a year after cessation of exercise.

See: My friend has dementia, what can I do?

While a wide variety of exercise types offer protection against developing Alzheimer’s disease, they all tend to be fairly intense. Sherzai noted that there is some evidence that there may be an upper limit to the intensity, above which there is no added benefit, or possibly even harm. But generally speaking, the more strenuous your workout, the better.

“Both aerobic and anaerobic exercise are effective,” Sherzai said, “but they must be strenuous enough to get your blood pumping.”

He especially recommends exercises involving the legs, whether that’s walking, running, cycling or weight lifting, because, “your legs — not the heart — are the largest pump in the body and moving that blood changes the architecture of the brain’s vascular system. It makes it healthier.”

For those not healthy enough to engage in moderate or strenuous activity, Sherzai says that lighter exercise still has both direct and indirect benefits for the brain. It’s not one or the other, but rather a matter of degrees.

The takeaway here is this: Exercise! As often as you can, for as long as you can, as strenuously as you can. Your brain will thank you. 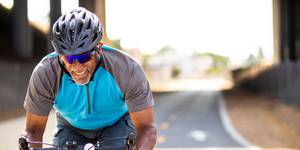 The CAM Guide to Cancer: An Integrative Approach to Prevention, Treatment, and Healing
UP NEXT...
An NSCLC Expert’s Take on Aggressive Disease Management
CME