Severe Covid leading to hospitalization and death overwhelmingly affects the older people and those who already suffer from other illnesses, like heart conditions, kidney disease, and diabetes.

But young, healthy people can also succumb. To explain this phenomenon, scientists have been looking at how a person's genes might make them more susceptible to severe Covid.   "You can have people of the same age, same sex, and same health overall and they may still react very differently to an infection from SARS-Cov-2," epidemiologist Seiamak Bahram told AFP. In research published earlier this month, Bahram's team studied the RNA -- the molecules that interpret genetic coding -- of a group of 94 people during the first wave of the pandemic in France. The subjects, all under 50 and without other illnesses, included 47 severe Covid patients in intensive care, 25 "non-critical" patients, and 22 healthy individuals. By observing how their RNA behaved and comparing the results to a second set of subjects, Bahram was able to zero in on the importance of a gene signature known as ADAM9. "Some of the genes included in this signature could ultimately become therapeutic targets for severe forms of COVID-19 or acute respiratory distress syndrome," the study published in Science Translational Medicine concluded. Bahram's study took a unique approach: most studies looking at how genes affect Covid response involve looking directly at the genome of patients and comparing their illness severity. In one such study in June last year, researchers looked at 1,980 severe Covid patients from Italy and Spain, comparing them with a similar but otherwise healthy cohort.  The study concluded that a cluster of six genes seemed to make patients more vulnerable to respiratory failure.

The practical value of such broad research is limited.  Besides only being able to identify the most common genetic mutations, the results are too general to determine how a precise gene might influence the body's response to Covid. Another kind of study takes an opposite approach, focusing on known problem genes to see whether they might be causing severe cases of Covid. In this way, researchers under the direction of geneticist Laurent Abel discovered another gene, TLR7, whose mutations altered the immune response in the early stages of infection. "We looked at genes whose mutations were already known to cause either severe flu or other illnesses like viral encephalitis," Abel told AFP of the research published in August. TLR7 mutations are much more common in men with severe Covid than in the rest of the population. For now, genetics cannot be used to prevent severe Covid.  "We can't genetically test everyone," says Abel, "it's not on the agenda, not possible and not reasonable". Instead, he and Bahram say their research could help in the development of treatments. TLR7, for example, prevents the body from reacting efficiently to proteins known as interferons, which are crucial to mounting an immune response. This has spurred research into interferon-based treatments -- but clinical trials have so far produced minimal results.   One thing is clear: there is no single gene that makes Covid more dangerous for its carriers. "It would have been too simple if one mechanism explained everything," said Bahram. "In medicine, that doesn't exist." 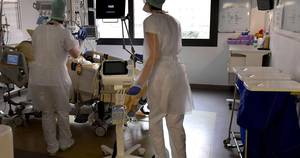