The COVID-19 pandemic has changed the way people perceive the passage of time, according to an article published in the journal Science Advances.

At the end of the first month of social distancing, in May 2020, most participants in the study (65%) reported feeling time was passing more slowly. The researchers classified this perception as “time expansion” and found it to be associated with feelings of loneliness and a lack of positive experiences in the period.

An even larger proportion (75%) reported feeling less “time pressure”, when the clock appears to go faster, allowing less time for day-to-day tasks and leisure. The vast majority of interviewees (90%) said they were sheltering at home during the period.

“We followed the volunteers for five months to see if this ‘snapshot’ of the start of the pandemic would change over time. We found that the feeling of time expansion diminished as the weeks went by, but we didn’t detect significant differences with regard to time pressure,” André Cravo, first author of the article, told Agência FAPESP. Cravo is a professor at the Federal University of ABC in São Paulo state, Brazil.

The study began on May 6, when 3,855 volunteers recruited via social media answered a ten-item online questionnaire and completed a simple task designed to gauge their ability to estimate short intervals (pressing start and stop buttons in 1, 3 and 12 seconds). They were then asked about their routine in the previous week (whether they had completed all the requisite tasks and how much time they had devoted to leisure), and how they were feeling now (happy, sad, lonely etc).

“They were invited to return every week for further sessions, but not everyone did,” Cravo said. “In the final analysis, we considered data for 900 participants who answered the questionnaire for at least four weeks, albeit not all consecutively.”

Using time awareness scales from 0 to 100 that are standard for this type of survey, the researchers analyzed the answers and calculated the two parameters – time expansion and time pressure – to see whether they increased or decreased week by week.

“Besides a rise or fall on the scales, we also analyzed the factors that accompanied the changes. During the five-month period, we observed a similar pattern: in weeks when participants reported feeling lonely and experiencing less positive affect, they also felt time pass more slowly. In highly stressful situations, they felt time pass more quickly,” Cravo said.

When the first set of answers to the question on the passage of time was compared with the second, provided at the end of the first month of confinement, perceptions of time expansion had risen 20 points while time pressure had fallen 30 points, according to Raymundo Machado, a researcher at the Brain Institute of the Albert Einstein Jewish Hospital (HIAE) in São Paulo, and last author of the article. “These results are evidently affected by memory bias, however, because no measurements were made before the pandemic,” he said.

Time slowed most for younger participants early in the pandemic, when compliance with social distancing rules was strictest. Except for age, demographic factors such as household size, occupation and gender, had no influence on the results.

For the authors, this may be an effect of the sample profile. Most of the volunteers (80.5%) lived in the Southeast region. A large majority were women (74.32%). Most had completed secondary school, and a great many even had a university degree (71.78%). In terms of income, roughly a third were upper middle class (33.08%). Sizable minorities worked in education (19.43%) and healthcare (15.36%).

“This is typical of online surveys, where a majority are women living in the Southeast with high levels of formal education. The influence of demographics might have been more evident if the sample had represented the Brazilian population better,” Machado said.

Although the pandemic changed participants’ perceptions of the passage of time, it apparently did not affect their ability to sense duration, measured by the button-pressing task. “All of us are able to estimate short intervals. When the results of this time estimation test [including overestimation and underestimation of the intervals] were compared with the time awareness scores, there was no correlation,” Machado said.

According to Cravo, evidence from the scientific literature suggests the feeling that time is passing more slowly or more quickly is influenced mainly by two factors: the relevance of time in a particular context, and unpredictability. “For example, if you’re late for work [so that time is relevant in the context] and have to wait for a bus [unpredictable timing], you have an extreme perception that the minutes aren’t passing. When you’re on vacation and having fun, time isn’t relevant and appears to fly,” he said.

The perception often changes when we recall past situations. “When you remember what you did during a vacation, time seems to have lasted longer. On the contrary, when you’re standing in line, time goes all too slowly but when you recall the situation some time later, it feels as if it was over quickly,” Cravo said.

In the case of the COVID-19 pandemic, how people will remember the passage of time during the period of social distancing is unknown. “Several temporal milestones, such as Carnival, the June festivals and birthdays, had to be skipped in the last two years, so the question remains open,” he concluded. 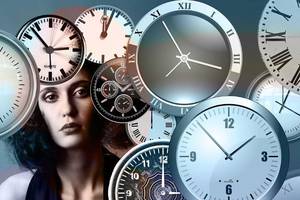