After experiencing an ACL injury, a common sports injury involving ligaments in the knee, many athletes find they can’t return to play with the same vigor as before their injury. But, a new study, published in The American Journal of Sports Medicine, finds human growth hormone treatment after ACL reconstructive surgery may prevent the loss of muscle strength in the knee.

“While modern surgical techniques can reconstruct ACLs in a minimally invasive way, the associated muscle atrophy can be a greater challenge to overcome,” says Asheesh Bedi, M.D., senior author of the study, chief of sports medicine and shoulder surgery at Michigan Medicine and director of the Michigan Center for Human Athletic Medicine and Performance (MCHAMP).

“Residual atrophy can slow or limit the safe return to the prior level of competition, and contribute to risk of re-injury and even arthritis.”

HGH, a hormone within the body, helps cells and tissues grow and regenerate. HGH supplements are banned by the World Anti-Doping Agency, and in collegiate and professional sports.

“When you hear of athletes taking HGH drugs when they are healthy, it’s considered doping because they are essentially trying to overproduce the hormone and bulk their muscles and tissues as a competitive advantage,” says Christopher Mendias, Ph.D., ATC, the lead author of the study, an adjunct associate professor of orthopedic surgery at Michigan Medicine and an associate scientist in the Arthritis and Tissue Degeneration Program at the Hospital for Special Surgery.

Bedi and Mendias hypothesized that administering HGH supplements to injured athletes may activate HGH within the body to target the ACL tear and prevent the knee muscles from losing strength.

“Even after rehabilitation, many patients have muscles that are 30 to 40% weaker when they return to sports compared to their pre-surgery strength,” Mendias says.

The researchers examined 19 male athletes, ages 18 to 35, with ACL tears who were scheduled for ACL reconstruction surgery at Michigan Medicine. The study participants were randomly assigned to self-inject HGH or a placebo solution into their lower abdominal muscles twice daily over a six-week period, beginning one week prior to surgery. The research team excluded collegiate, professional, or elite athletes from the study because of the substance ban, as well as patients with diabetes, as developing type 2 diabetes is a side effect of HGH supplements.

Prescription HGH is only available for treating growth hormone deficiency syndromes and can’t be used off-label without approval from the U.S. Food and Drug Administration. By obtaining an investigational new drug exemption from the FDA, the research team was able to administer the drug to study enrollees.

The research team found the HGH injections did appear to have an effect after measuring knee muscle strength and volume, patient-reported outcomes, such as pain and symptoms, and analyzing biomarkers in blood samples from the injured athletes versus individuals without an ACL tear.

“While HGH did not appear to affect muscle volume or our patient-reported outcome scores, we found a 29% higher knee extension strength in our patients that had performed the HGH injections compared to those in the placebo group,” Bedi says.

Examining the blood analyses revealed other signs of muscle and cartilage change. Patients who performed the HGH treatments had a 2.1-fold increase in circulating insulin-like growth factor 1 (IGF1), a protein similar to insulin that plays an important role in muscle growth. In addition, their blood samples indicated a 36% lower level of matrix metalloproteinase–3 (MMP3), an enzyme that breaks down proteins during growth processes in the body. MMP3 was an indirect biomarker of cartilage wear down in the study.

“We observed a consistent reduction in MMP3 in the HGH group from the first through the 12th post-operative weeks,” Mendias says. “This finding suggests a potential protective effect of HGH after ACL reconstruction and that we should look more closely at its potential for cartilage healing in further studies.”

Future Use in Sports?

Bedi and Mendias hope the results of this study allow for revisiting reevaluation of the World Anti-Doping Agency and sports agencies’ ban on HGH.

“Perhaps athletes could petition for a Therapeutic Use Exception, which allows a banned substance for a medically-appropriate reason, to prevent loss of muscle strength after ACL reconstruction,” Mendias says. “Treatment occurs during a time when athletes are not playing due to their injuries. The goal is to prevent muscle weakness, not make athletes stronger than they were before their injuries. Any small performance-enhancing effects of human growth hormone seem to wear off quickly after stopping the medication, and does not offer a competitive advantage.”

The research team notes that further studies into HGH are needed.

“We hope to build upon this research with future studies that include larger cohorts of athletes with broader demographics,” Bedi says.

Mendias adds, “Further studies would also allow us to petition the FDA to approve the addition of orthopedic injuries as an on-label indication for the drug.” 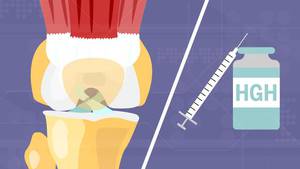