Many people worldwide suffer from a chronic type of inflammatory bowel disease (IBD) called ulcerative colitis (UC), which is characterized by erosions and ulcers within the mucous membrane of the colon (large intestine). It was understood that UC involves chronic and aggressive inflammation, but more specific details of its pathogenesis were not fully known.

Currently, there is no drug that can completely cure UC. Therefore, clinicians and scientists are aiming to develop a treatment that can target the actual molecular cause. In a recent article published in Scientific Reports, a team led by researchers at Osaka University described the design of an ingestible agent that was able to target the high levels of oxidation associated with UC in a lab mouse model.

Previous studies have shown that there are significant amounts of reactive oxygen species (ROS) in the intestinal mucosa of those with UC. The ROS can lead to oxide accumulation, which stimulates the inflammation that damages the cells, causes the disease’s symptoms, and can even induce colon cancer in some cases.

“Data in the literature pointed to the important role of ROS and oxidative stress in UC,” says lead author Yoshihisa Koyama. “A logical hypothesis from those results is that an efficient antioxidant that can eliminate the ROS may be an effective treatment method for this disease.”

In fact, reports have demonstrated that hydrogen is a strong antioxidant that showed promising results in several diseases, including IBD. The researchers developed a silicon (Si)-based agent ingestible agent that stably generates hydrogen when reacting with water within the gastrointestinal tract. The researchers tested this approach in a mouse model of UC and found that the Si-treated mice had less weight loss, inflammation, and diarrhea compared with the control mice.

The levels of certain proinflammatory cytokines were reduced in the mice given the therapeutic agent. Si-based agent also significantly reduced colon atrophy, the hemorrhage, and injury associated with chronic inflammation. There was also very little infiltration of immune cells, suggesting that the inflammatory response was suppressed.

The team confirmed that the Si-based agent successfully increased the hydrogen levels within the colon.

Overall, the results of this study suggest that the Si-based agent may be a new therapeutic candidate. 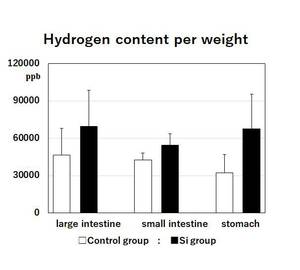