Chronic hypertension is contributing substantially to maternal deaths in the United States, with particular risk among Black women, according to new research from Rutgers Robert Wood Johnson Medical School's Department of Obstetrics, Gynecology and Reproductive Sciences.

The extensive study, published in the December issue of Hypertension, analyzed data from more than 155 million births and 3,287 hypertension-related maternal deaths among women aged 15 to 49 from 1979 to 2018 in the United States. The study showed a 15-fold increase in maternal mortality rates associated with chronic hypertension over the 40-year period.

"Overall hypertension-associated deaths declined in the U.S. over the last 40 years, but this decline is restricted to women who have pre-eclampsia/eclampsia as the cause. If you isolate the data on women who have chronic hypertension, which is defined as a pre-existing hypertensive condition or hypertension diagnosed within the first 20 weeks of pregnancy, as a cause, mortality rates have increased quite substantially; on average, by about 9.2 percent per year over the last 40 years. So it is chronic hypertension that has really driven the maternal mortality trends in the U.S. over the last 40 years," said study author Cande V. Ananth, professor, vice chair for academic affairs, and chief of the Division of Epidemiology and Biostatistics in the Department of Obstetrics, Gynecology and Reproductive Sciences at Rutgers Robert Wood Johnson Medical School.

The incidence of hypertension-related maternal deaths sharply increased with maternal age, being highest among women age 45 to 49, and obesity, the study found. The researchers also uncovered a substantial race disparity in the trends of maternal mortality rates due to hypertensive conditions, Ananth said.

"Black women were at anywhere from three- to four-fold increased risk of dying from a hypertension-related cause compared to white women in the United States, and this disparity has persisted for the last 40 years," he said, noting that problems with access to care and many risk factors for hypertensive complications are higher among Black women than white women, which contributes to this disparity.

We have gotten much better at treating women with pre-eclampsia/eclampsia during pregnancy, which has undoubtedly contributed to the decline in maternal death rates, but we haven't done as good a job in treating women with chronic hypertension. Part of that is because many of these women come in undiagnosed, and it's often problematic to treat women with drugs to reduce their blood pressure, particularly early in pregnancy, so there's a conflict of what's the right approach."

However, hypertensive complications might also be reduced by focusing on lifestyle choices; particularly smoking, alcohol, weight, and a balanced diet; both before pregnancy and early in pregnancy, Ananth said. The study findings have implications for clinical providers as well, he said, noting that the burden of maternal deaths occurs within the first six weeks (42 days) after pregnancy.

"Women who have any obstetrical complications, particularly hypertension-related complications, should be monitored very closely during the course of pregnancy and delivery, as well as in the postpartum period. Following these women after pregnancy is crucial," Ananth stressed. "In general, approximately 80-85 percent of women who experienced pre-eclampsia/eclampsia during their pregnancy see those symptoms resolve after the placenta is delivered, but for the remaining one-fifth of women, the hypertension condition persists for the remainder of her life. These women are particularly vulnerable and high risk, and need to be monitored carefully and treated for hypertensive conditions, particularly through medication and changes in lifestyle/behavior."

Ananth also believes the implementation of "obstetrics bundles" for high-risk conditions should be more widespread, implemented in all hospitals in the United States. "These bundles set the stage for identification, treatment and prevention of various obstetrical complications, including hypertension, and their effectiveness has been well documented in several studies, including those in New York, as well as in California," he said.

"Women are starting their families when they are older and they may be heavier and in a poorer state of health," said Rosen. "For a portion of the time period studied, the CDC reported that the percentage of first births to women between 30 and 34 rose by 28 percent, and those for women 35 and older rose 23 percent. To help reduce hypertension-related deaths in these groups, we all need to work to ensure women are in optimal health before they start their families. The four-fold increased risk for mortality in Black compared with white women is especially concerning, and special attention needs to be focused to eliminate this disparity." 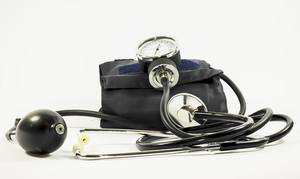