The U.S. Food and Drug Administration (FDA) has updated its rules around use of experimental treatments for the ongoing COVID-19 pandemic to include use of "convalescent plasma," in cases where the patient's life is seriously or immediately threatened. This isn't an approval of the procedure as a certified treatment, but rather an emergency clearance that applies only on a case-by-case basis, and only in extreme cases, as a means of helping further research being done into the possible efficacy of plasma collected from patients who have already contracted, and subsequently recovered from, a case of COVID-19.

Plasma is a component of human blood -- specifically the liquid part -- which contains, among other things, antibodies that contribute to a body's immune response. Use of plasma, through direct transfusion into a patient, like every other proposed treatment for COVID-19 (and the SARS-CoV-2 virus that causes it), has not undergone the clinical studies needed to show that it's actually safe and effective in combating the disease.

Despite a lack of completed clinical trials, the FDA has granted this temporary authorization under its Investigational New Drug Applicants (eINDS) exemption, in light of the extent and nature of the current public health threat that COVID-19 represents. A number of pre-clinical and clinical trials around use of plasma from patients who have recovered are underway, however, and there are some promising signs that convalescent plasma could indeed be effective against SARS-CoV-2.

This is hardly the first time that convalescent plasma has been proposed or attempted to fight off a disease. People who have had a virus and subsequently recovered from it typically build up an immunity to it -- either long-term, as with chicken pox, or short-term, as with the seasonal flu. Logically, it stands to reason that it should be possible, at least in theory, to take the antibodies from one individual who has already developed them, and transfuse them into a patient whose immune system is not doing a good enough job producing its own.

Convalescent plasma transfusions have been used in previous outbreaks, including against the H1N1 flu, as well as the original SARS and MERS epidemics, with varying results.

A number of research projects are underway regarding use of plasma against COVID-19, including a study by a team of Chinese medical professionals published in pre-print format (prior to any peer review) that studied 10 severe patients who received donations from recently recovered patients. That study found that in five of the 10 cases, the level of antibodies "increased rapidly" immediately post-transfusion (four other patients already had a high level of antibodies, and that persisted), and that within a week, the presence of the virus was undetectable in seven patients.

That still isn't a formal clinical study, but other small-scale investigations from clinical practice have shown similar results. A group of doctors and researchers have also put together a set of protocols for use by doctors working with both donors and recipients to help align efforts across investigations and ensure that everyone working on this problem in the medical science community is working from the same playbook.

New York Governor Andrew Cuomo announced that state health agencies would be beginning a convalescent plasma trial this week, and it was cited by FDA Director Dr. Stephen Hahn as an area of early promise last week during a White House coronavirus task force briefing.

All donor patients would have to be tested to confirm that they are not at risk of transmitting the virus, and they must also qualify as a blood donor under the existing rules in place by state and federal agencies. While some early studies have shown that plasma transfusions could be effective in prophylactic use (meaning treating healthy people before they encounter the virus), this FDA specifically prohibits any prophylactic use.

As with all the treatments currently under development, this will take a lot of testing and research both to validate, and then to certify for general use -- though there are a lot of researchers working on those challenges, because work to date shows this is likely to be more effective as a strategy in cases that haven't yet progressed to the severe symptom stage. Convalescent plasma treatment isn't new, or even all that sophisticated, but it does have the advantage of being relatively safe (in line with standard blood transfusions, once a person is confirmed to no longer be carrying any active virus), so this could be something to watch for more active updates versus some of the longer-lead treatment technologies in development. 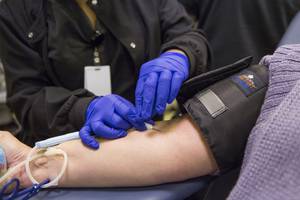