Thanks to science and modern medicine, we know a lot more now about the early signs of certain diseases and which biomarkers to check. Most importantly, we have the necessary devices and techniques to conveniently sample and analyze these biomarkers in clinical settings so that doctors, patients, and caregivers can act accordingly. In the ever-evolving field of healthcare technology, wearable electronics and biosensors are seen as potential game-changers, as they allow both medical staff and non-medical people to remotely monitor relevant bodily variables.

In the specific case of diabetes—a relatively common disease—monitoring blood sugar levels is crucial. Fortunately, urine sugar levels provide indirect information about blood sugar levels and can be used as an alternative biomarker to avoid drawing blood constantly. Moreover, to measure urine sugar levels in elderly or long-term care patients, sensors can be embedded directly into their diapers. By wirelessly transmitting the acquired data, diaper sensors can greatly simplify caretaking and health monitoring tasks. However, both sensors and wireless transmitters require an energy source to function and putting batteries in diapers may be a questionable solution from both environmental and practical standpoints.

Fortunately, scientists from Japan have worked out a solution to this problem. In a recent study published in ACS Sensors, Associate Professor Isao Shitanda, Professor Masayuku Itagaki, and Mr. Yuki Fujimura from Tokyo University of Science (TUS), Japan, present a promising approach to realizing self-powered diaper sensors that can generate energy directly from urine. This work was done in collaboration with Associate Professor Seiya Tsujimura from the University of Tsukuba, Japan. Worth noting, this work is in line with other research efforts of Dr. Shitanda and his colleagues to develop self-powered biosensors like a lactate sensor energized entirely by sweat.

But how does one generate enough electricity from urine to power a sensor? The answer lies in electrochemistry. The scientists developed a paper-based biofuel cell that, through a pair of reduction-oxidation reactions, outputs electrical power proportional to the amount of glucose in the urine. Important considerations in the design of such biofuel cells are the amount of urine needed to generate enough power and the overall stability and durability of the device. With this in mind, the scientists developed a special anode, the negative terminal of an electrochemical cell, using a process known as “graft polymerization” that allowed them to firmly anchor glucose-reactive enzymes and mediator molecules to a porous carbon layer, which served as the base conductive material.

The scientists tested their self-powered biosensor in diapers using artificial urine at various glucose concentrations. They used the generated energy to power up a Bluetooth Low Energy transmitter, and remotely monitored the measured concentration using a smartphone. They found that the biofuel cell could detect urine sugar in a very short time (within 1 second).

“Besides monitoring glucose in the context of diabetes, diaper sensors can be used to remotely check for the presence of urine if you stock up on sugar as fuel in advance. In hospitals or nursing care sites, where potentially hundreds of diapers have to be checked periodically, the proposed device could take a great weight off the shoulders of caregivers,” comments Dr. Shitanda.

In short, the sensor that Dr. Shitanda’s team has engineered can not only prevent diabetes, but also make diaper management more efficient and responsive without compromising the environment. “We believe the concept developed in this study could become a very promising tool towards the general development of self-powered wearable biosensors,” says Dr. Shitanda.

Let’s hope future studies will further improve upon wearable biosensors powered by our own body fluids. 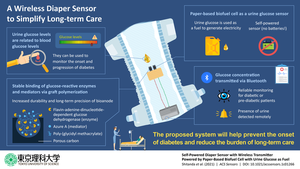