A modification that creates more male offspring was able to eliminate populations of malaria mosquitoes in lab experiments.

The team's modification causes mosquitoes to produce more male offspring, eventually leading to no females being born and a total collapse in the population. This represents the first successful sex-distorter gene drive ever created, a goal for scientists as these modifications are expected to be extremely effective at controlling natural mosquito populations.

There were 228 million cases of malaria in 2018, and 405,000 deaths, with new interventions needed to move towards malaria eradication. There are around 3500 species of mosquito worldwide, of which only 40 related species can carry malaria. The team's modification was applied to Anopheles gambiae mosquitoes, the main malaria vector in sub-Saharan Africa.

The hope is that Anopheles gambiae mosquitoes carrying a sex-distorter gene drive would be released in the future, spreading the male bias within local malaria-carrying mosquito populations and causing them to collapse.

As only females bite and take blood meals, only they can pass on malaria, so the modification could have a double effect by biasing the population towards fewer females even before the population collapses.

The lab-based experiments were performed with caged populations of mosquitoes, and more experiments are needed before the team considers releasing any modified mosquitoes in the wild. The results are published today in Nature Biotechnology.

Lead scientist Professor Andrea Crisanti, from the Department of Life Sciences at Imperial, said: "This study represents a key milestone in the long-sought objective to bias the progeny of the human malaria mosquito so that only non-biting males are produced. Having a proven driving sex-distorter opens a new avenue for scientists to develop genetic vector controls of malaria with the aim of eradicating the disease."

The modification works by using a DNA-cutting enzyme to destroy the X chromosome during the production of sperm, leading to a predominantly male offspring, as females require two Xs. Although sex-distorters based on similar mechanisms have been created before, the new version was coupled to a gene drive to allow it to spread through a population from a very small initial frequency in a very effective way.

The gene spreads faster than would be expected naturally thanks to the gene drive component, which means the modification is inherited nearly 100 percent of the time, and not just 50 percent as would be expected from normal mating.

Coupling a sex-distorter with a gene drive increases also the robustness of the system. As it spreads through males it is less sensitive to any 'fitness cost'- there is no detriment to the males, which means the mosquitoes are more likely to mate and pass on their genes, meaning the modification can spread effectively.

The male-biased gene was shown to spread quickly through the population without being stopped by resistance with only a small fraction of the initial mosquitoes possessing the gene (2.5% release frequency), showing that it could have huge potential to control malaria-carrying mosquitoes in the field.

Moving to the Next Phase

The new male-biased mosquitoes lead to population crashes faster than the female-infertility mosquitoes, and has the added benefit of reducing the proportion of biting females at an earlier stage. It will also now go into larger cage trials, where competition for food, mating dynamics, and other ecological factors may change the fate of the gene drive.

Co-lead author on the new paper, Dr. Alekos Simoni, said: "The new result is very exciting and it's great to see this line of mosquitoes move onto the next phase of the project. When we started no-one knew if it would work, so I am proud that we transformed a novel theoretical idea into something that was shown to work in the lab and has the potential to save millions of lives." 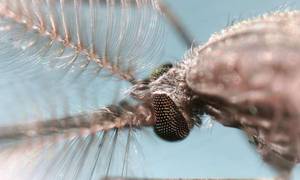