Uveal melanoma, or UM, is a rare and deadly cancer of the eye, and the mortality rate has remained unimproved for 40 years. Half of the melanomas spread to other organs of the body, causing death in less than a year, so new treatments to preserve vision and prevent death are an urgent need.

Now a preclinical study by researchers at the University of Alabama at Birmingham and Emory University, Atlanta, offers hope -- a small molecule inhibitor has been identified that dampens the potent drivers of this tumor. In mouse models, the inhibitor, KCN1, strongly limited primary disease in the eye and metastatic tumor dissemination to the liver, and animals survived longer, without overt side effects.

Thus, this class of inhibitory compounds shows promise, though the co-leaders of the research -- Erwin Van Meir, Ph.D., professor of neurosurgery at UAB, and Hans Grossniklaus, M.D., MBA, professor of ophthalmic pathology at Emory -- say the drug needs further optimization before clinical use.

"Overall," they wrote in the paper published in the journal Oncogene, "our preclinical studies support the further translation of the KCN1 arylsulfonamide scaffold toward a novel treatment for patients with metastatic uveal melanoma." The uvea is the pigmented layer of the eye.

Prior to this study, it was known that: 1) a hypoxia gene signature, indicative of low oxygen levels in the tumor, is associated with poor prognosis and a high metastatic rate in uveal melanoma; 2) the hypoxia-inducible transcription factor, or HIF, turns on a large number of gene products with critical roles in cancer growth and metastasis; and 3) for UM specifically, HIF promotes tumor progression by regulating proliferation, migration, invasion and adhesion of tumor cells, as well as promoting blood vessel growth to feed the tumor.

Little was known of the role of HIF in directing pro-invasive extracellular matrix remodeling in UM. Changes in the extracellular matrix, including increased collagen deposition and reorganization of collagen fibers outside the cell, is known to aid cancer progression and tumor cell invasion. Extracellular matrix is the non-cellular component of all tissues that provides physical scaffolding for cells and has other biochemical roles.

Hypoxia promotes collagen deposition, in part, because HIF increases production of two gene products, P4HA1 and P4HA2, that are part of an enzyme complex that adds hydroxyl residues to prolines in procollagen. Procollagen is a precursor protein in the complex maturation process that collagen undergoes.

In their study, Van Meir, Grossniklaus and colleagues decided to evaluate the expression of the P4HA1/2 genes in relation to UM patient prognosis, and to determine whether inhibiting hypoxia-induced P4HA1/2 expression in a preclinical model of metastatic UM would yield therapeutic benefit.

They found that P4HA1 and P4HA2 were induced by hypoxia in human UM cell lines, and this induction was reduced by KCN1. Comparison of 46 patients with non-metastatic UM and 46 with metastatic UM showed that P4HA1/2 were significantly overexpressed in patients with metastatic disease. Also, P4HA1/2 expression correlated with poor overall survival in UM patients. This suggests that P4HA1 and P4HA2 can serve as prognostic markers in UM, and that they may be important for malignant progression of the disease and patient survival.

The researchers next turned to preclinical animal models of UM. They showed that KCN1 was abundantly taken up in the liver and the eyes after intraperitoneal injection, and it dampened tumor growth and disease burden at the primary site of the eye, as well as reduced distant metastases in the liver. KCN1 also increased survival in three different models that test the growth of human UM after injection in mice uvea. The inhibitor was most effective at reducing metastases when it was administered early.

At the molecular level, treatment with KCN1 to inhibit the hypoxic induction of P4HA1/2 decreased the hydroxylation of proline amino acids in the procollagen. It also caused cleavage of the collagen and disordered the structure of collagen VI, a mature structural component of the extracellular matrix. These collagen changes correlated with a reduction in tumor cell invasion.

"Our study," Van Meir and Grossniklaus concluded, "suggests that KCN1 has desirable properties as a suppressor of metastasis: It is well tolerated, has excellent distribution to the eye and the liver, and is thus ideally suited for treating metastatic UM." 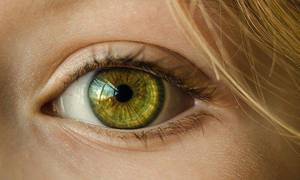 RCC Treatment Strategies in a Favorable-Risk Patient
UP NEXT...
The Standouts: One Colorectal Cancer Patient’s Story
CME