The best booster for the Johnson & Johnson COVID-19 vaccine may be either Pfizer-BioNTech or Moderna, according to a National Institutes of Health study posted Wednesday.

"The Mix and Match was a big study people were waiting for, it gave a lot of new data, and there hadn't been any about Johnson & Johnson with an mRNA booster before," said Dr. Eric Topol, vice president for research at Scripps Research in La Jolla, California, and a national expert on the use of data in medical research.

The study, which included nearly 500 people, found that the J&J shot followed by one of the mRNA vaccines as a booster produced a stronger immune response than two doses of J&J.

For people who got either the Pfizer or Moderna two-dose series, a booster dose of either mRNA vaccine was effective.

The new study came just a day before a crucial Food and Drug Administration advisory committee begins to meet to discuss possible booster doses of the Moderna and J&J vaccines. Pfizer boosters were approved on Sept. 24.

The study, from the Mix and Match Team, was sponsored by the National Institutes of Health. It compared all possible combinations of the three vaccines followed by a booster.

"If you look at the Mix and Match data, you’d say, ‘Wow, I really want to get an mRNA booster.' It basically converts Johnson & Johnson to be as good as an mRNA two-shot series,’” said Topol.

Each group was then divided into three smaller groups. One got Pfizer as their booster, one Moderna, and one J&J.

Participants' antibody levels against COVID-19 were measured two weeks and then four weeks after they received their booster shot.

The lowest antibody levels were for people who got a J&J shot followed by a J&J booster.

In response to the study, Johnson & Johnson noted that a booster of its vaccine increased the immune response regardless of a person's previous primary vaccination.

"Johnson & Johnson will continue to share available boosting data with the U.S. Food and Drug Administration (FDA) and other regulators, and looks forward to discussing the latest available data at this week’s Vaccines and Related Biological Products Advisory Committee, the company said in a release.

The NIH study didn't include real-world data about how effective the vaccines plus boosters were at preventing mild or severe COVID-19. However, the antibody response is believed to be a good indicator of vaccine effectiveness.

There is somewhat equivalent real-world data out of Spain and the United Kingdom. People who got the AstraZeneca vaccine, which is similar or the J&J vaccine, and then a Pfizer booster had high levels of antibodies.

J&J has a much larger study in the works but the data has not been given to the FDA, which makes the decision on whether to allow a booster. Whether the small group of recipients is enough for agency to approve a six-month booster isn’t clear.

Tracking COVID-19 vaccine distribution by state: How many people have been vaccinated in the US?

“The hope was that we would get a resolution of these issue and that J&J would get their emergency use authorization for a booster. Now things have gotten a little more complicated,” said Dr. William Schaffner, medical director for the National Foundation for Infectious Diseases.

The safety data for people receiving a J&J booster was good, and according to FDA, the vaccine “still affords protection against severe COVID-19 disease and death,” although less so than the Pfizer-BioNTech and Moderna mRNA-based vaccines.

In its briefing documents, J&J said boosters might be given anywhere between two and six months after the initial shot, depending on who got the shot and how strong their immune response was.

In briefing documents posted Wednesday, only data from a small study of 17 people who got a J&J booster shot six months after their first shot was presented. 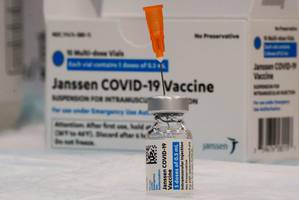