What if you could simply provide a urine sample rather than undergo a painful surgical procedure to find out if your cancer was responding to treatment? It may seem too good to be true, but researchers at Pavol Jozef Šafárik University in Košice, Slovakia, have identified fluorescent molecules in urine that may allow patients with malignant melanoma to do just that.

Tracking cancer progression is important as it allows doctors to see if someone is responding to treatment. At present, malignant melanoma patients require invasive biopsies to diagnose and track the progression of their cancer. Using this new approach, doctors could ask patients to provide a urine sample instead, and then fluorescent molecules in the sample could reveal disease progression rapidly and inexpensively.

The research article, "Fluorescence biomarkers of malignant melanoma detectable in urine," has been published in De Gruyter's open access journal Open Chemistry. It describes a group of fluorescent molecules -- easily detectable in urine -- which correlate with melanoma progression, creating new possibilities for monitoring the disease.

This technique is badly needed as malignant melanoma is particularly challenging to treat and monitor. This skin cancer is highly aggressive and frequently spreads to other sites in the body so monitoring its progression is very important. However, current techniques mean that patients have to undergo invasive surgery to remove tissue samples and then lab technicians must perform expensive and time-consuming analysis of these samples. Unfortunately, patients may avoid getting timely diagnosis and treatment as they fear these invasive procedures.

These issues prompted Dr. Ivana Špaková and colleagues to look for an alternative. They focused on specific fluorescent molecules that cancer cells produce during metabolic processes involved in their growth and progression, and which end up in urine.

The researchers analyzed urine samples from patients with malignant melanoma and healthy controls using fluorescence spectroscopy, a simple and inexpensive detection method, to see if there were any differences in levels of the fluorescent markers. They also performed genetic analysis for the same patients to examine genes involved in melanoma progression.

The urine samples from the malignant melanoma patients contained different levels of the metabolism-linked fluorescent markers compared with those from healthy controls. Strikingly, the levels of the fluorescent molecules in the urine correlated with the stage of melanoma and the expression of genes that are linked to melanoma progression, suggesting that the molecules have significant potential as biomarkers.

"Our results show that we can successfully use urine, a simply and non-invasively collected biological material, to determine the progression and treatment response of malignant melanoma," said Špaková. "The results highlight the potential of 'waste metabolites' in monitoring disease. This method is a user friendly and straightforward technique which could be performed using standard laboratory equipment." 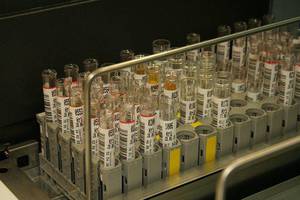 Exploring Emerging Advancements in Early Cancer Detection
UP NEXT...
Treating Metastatic Breast Cancer: Where Are We Now?
CME