In 2018, a paper by David A. Siegel, MD, MPH, of the Centers for Disease Control and Prevention (CDC) made headlines in New Hampshire. The paper reported that the state of New Hampshire and the Northeast region of the U.S. have some of the highest incidence rates of pediatric cancer (age 0-19) in the country. But the report was a descriptive study, and the claims about New Hampshire cancer rates did not take important factors such as race or ethnicity into account.

“Pediatric cancer rates are known to be highest in white children than other racial/ethnic subgroups, so we would expect populations with more minorities to have lower rates, which, in part, led us to re-examine the previous report,” says Judy R. Rees, BM, BCh, MPH, Ph.D., a cancer population scientist at Dartmouth Cancer Center who specializes in studying cancer data.

Using the Cancer in North America (CiNA) analytical file – the same data used by Dr. Siegel – Rees’ team examined rates overall, as well as by race and ethnicity, and statistically tested whether New Hampshire really is an outlier, or whether the broader Northeast region (Connecticut, Maine, Massachusetts, New Hampshire, New Jersey, New York, Pennsylvania Rhode Island, and Vermont) has a higher incidence of pediatric cancer than the rest of the country.

The study reveals that the Northeast does have a statistically significantly higher incidence of cancer compared to all other U.S. regions (i.e., Midwest, South, West), but within the Northeastern states, no single state is an outlier.

“New Hampshire was previously cited as the state with the highest pediatric cancer incidence rate, but in fact, New Hampshire is not statistically distinguishable from other states within the Northeast, both overall and when stratified by race,” confirms Rees.

These findings, “Pediatric Cancer by Race, Ethnicity, and Region in the United States” are newly published in Cancer Epidemiology, Biomarkers and Prevention, a journal of the American Association for Cancer Research.

Variations in the incidence of pediatric cancer and cancer subtypes in children of different races were also examined in the study. The age-standardized incidence rates vary by more than 38% across racial groups, with the lowest rates in non-Hispanic Black children (144.8 per million per year) and the highest in non-Hispanic White children (201.8 per million per year). This means consideration of race and ethnicity is critical when comparing different states and regions.

“We see big differences in cancer types by race/ethnicity and region. In particular, the higher incidence of certain cancer types in the Northeast compared to the U.S. was not mirrored in the Hispanic population,” says Rees, who notes the importance of trying to understand the risk factors at play in the Northeast, and the reasons why some subgroups, such as Hispanic, and American Indian/Alaska Native children, may have different patterns of risk.

“Based on our work, I think the most important questions now are, why does the Northeast have the highest childhood cancer rates in the country, and is there something we as a region can do about it?”

Underlying reasons, even after stratifying by race, are likely multifactorial. In 2019, New Hampshire invested legislative funds to explore childhood cancer issues in the Granite State, led by the NH State Cancer Registry team. This funding allowed a group of cross-disciplinary childhood cancer and environmental health experts to review the evidence on childhood cancer risk factors, including maternal age at delivery, socioeconomic factors, and a host of other possible explanations such as environmental chemical and radiation exposure, parental smoking and use of recreational drugs and alcohol, and more.

As regional differences in pediatric cancer incidence are explored, Rees emphasizes the value of ongoing collaborations between Northeastern states’ health departments and epidemiologists as experts seek to understand the causes and possible solutions. 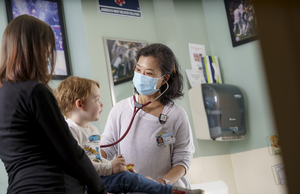