Health insurer Centene expects the rise in unemployment amid the spread of the coronavirus strain COVID-19 to boost Medicaid and Obamacare enrollment in the coming months, increase revenue to as much as $112 billion and spotlight the need to address health disparities.

The rosy financial outlook for the health insurer Friday came on a day when Centene also announced plans to increase the company’s focus on health disparities, which the company said are paramount in the U.S. and the insurer is uniquely positioned to address. The pandemic has heightened a focus by providers of medical care and insurers on health disparities with several reports showing communities of color being disproportionately hit by COVID-19.

“Black lives matter,” Centene chairman and CEO Michael Neidorff told analysts and investors watching the company’s virtual investor presentation Friday morning. In a speech normally focused on financial performance, Neidorff spoke for several minutes on issues of race and health disparities given the national discussion, particularly since the death of George Floyd in police custody on May 25.

Centene is the nation’s biggest provider of individual coverage under the Affordable Care Act also known as Obamacare and a large provider of Medicaid health benefits and it expects its enrollment to grow in the coming months amid the COVID-19 pandemic.

“We also acknowledge the deep-rooted racial and social justice issues at hand and stand united in our resolve to help drive systemic change in our country, through various initiatives such as the creation of our Health Disparities Task Force,” Neidorff said.

Earlier this week, Centene announced a research partnership with the National Minority Quality Forum  “to assess the impact of COVID-19 on racial minorities and underserved communities across the country.” Centene pointed to a study from APM Research Lab that showed African Americans dying from Covid-19 at nearly three times the rate of white Americans.  a greater share of confirmed cases than their share of the population.

Centene said Friday it expects total revenues to be “$109.5 billion to $111.9 billion,” which is between $4 billion and $5 billion ahead of projections made earlier this year. Meanwhile, Centene said “adjusted diluted earnings per share for 2020 are expected to be $4.76 to $4.96, representing a $0.20 increase at the midpoint.”

"Our increased earnings guidance for the full year demonstrates the strength of our business and our ability to navigate the pandemic while meeting the critical needs of our members, providers and state partners," Neidorff said. "We continue to see tremendous opportunity in a dynamic healthcare environment as the roles of managed care companies have never been more important than they are today.”

Centene’s growth will largely come from people who are losing their jobs and health coverage and will turn to either individual coverage known as Obamacare under the ACA or Medicaid benefits, which Centene administers in partnership with many states.

Centene, which bought WellCare Health Plans earlier this year, is now a national health plan providing benefits to 1 in 15 Americans and the largest provider of individual coverage under the ACA. Centene reported nearly 2.2 million enrollees in its individual plans as of the end of the first quarter compared to 1.98 million in the year-ago period. 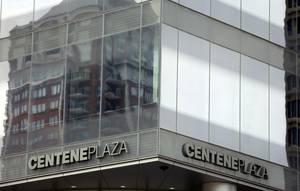