A new poll published Wednesday found that about one in five Americans said they'd refuse a COVID-19 vaccine should one become available.

Only about half of respondents to the poll, conducted by The Associated Press-NORC Center for Public Affairs Research, said they would get such a vaccine, while 31% said they were not yet sure whether they would get one.

The poll surveyed 1,056 adults and was conducted May 14-18. The results were released on the same day when the US reached a grim milestone of 100,000 deaths from the novel coronavirus, which causes the illness known as COVID-19.

"There's still a large amount of uncertainty around taking the vaccine," Caitlin Oppenheimer, the senior vice president of Public Health at NORC, told the AP. "There is a lot of opportunity to communicate with Americans about the value and the safety of a vaccine."

Experts have touted a COVID-19 vaccine as the solution to allowing the world to return to something resembling normality. The Centers for Disease Control and Prevention describes vaccinations as "one of the best ways to put an end to the serious effects of certain diseases."

Respondents' uncertainty in this case, however, could have to do with the unprecedented circumstances surrounding COVID-19, which has prompted a worldwide race to condense a development process that normally takes several years into what scientists hope could be 12 to 18 months.

Melanie Dries, 56, from Colorado, told the AP she was not an anti-vaxxer but was concerned about getting a COVID-19 vaccine in the near feature, saying it "causes me to fear that it won't be widely tested as to side effects."

Dr. Francis Collins, the director of the National Institutes of Health, told the AP in a previous interview that he "would not want people to think that we're cutting corners because that would be a big mistake."

"I think this is an effort to try to achieve efficiencies, but not to sacrifice rigor," he said, adding that "definitely the worst thing that could happen is if we rush through a vaccine that turns out to have significant side effects."

The Trump administration announced a vaccine-distribution program, dubbed Operation Warp Speed, meant to have 300 million doses in stock by January. The Department of Health and Human Services also promised earlier this week to provide "up to $1.2 billion" in funds to a laboratory at Oxford University working to develop a vaccine, The New York Times reported.

"It's always better to underpromise and overdeliver," Dr. William Schaffner, an infectious-disease expert at Vanderbilt University Medical Center, told the AP. "The unexpected looms large, and that's why I think for any of these vaccines, we're going to need a large safety database to provide the reassurance."

About seven in 10 of those who said they would get the coronavirus vaccine said they believed life would not return to normal without one, with other top reasons for getting vaccinated including protecting themselves, their families, and the community.

"I'm definitely going to get it," Brandon Grimes, 35, from Austin, Texas, told the AP. "As a father who takes care of his family, I think ... it's important for me to get vaccinated as soon as it's available to better protect my family." 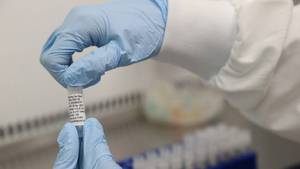 Closing the Time Gap with LDCT Screening: A Preventative Screening Technique for Lung Cancer
UP NEXT...
Full Spectrum of Breast Reconstruction Surgeries: From Cosmetic to Breast Cancer Diagnosis
CME