Researchers at the VU University Medical Center in the Netherlands have tested a new drug in patient samples and mice with multiple myeloma and discovered that it was effective even in advanced disease - a point when many patients currently run out of options. These promising results could pave the way for the new drug to be tested in patients.

Multiple myeloma is a cancer that affects cells in the bone marrow that produce antibodies - small molecules that fight infections in the body. Multiple myeloma is not considered to be a curable cancer and almost all patients eventually relapse. In the UK, almost 6,000 people are diagnosed with multiple myeloma every year - that's 16 people per day.

The new drug, called FL118, has previously shown promise when tested on colon and head and neck cancer cells in the lab. This new study, led by Dr Tuna Mutis and funded by Worldwide Cancer Research and the Dutch Cancer Society, was recently published in the journal Haematologica.

Cancer cells can become resistant to treatment by recruiting surrounding healthy cells to support them. The researchers found that not only is FL118 effective at killing multiple myeloma cells when they are surrounded by these support cells, but it was also able to reverse treatment resistance. This suggests the drug could have potential to treat patients that are no longer responding to standard therapies.

Using patient samples of newly diagnosed and relapsed or treatment resistant patients, FL118 was found to be more effective against cancer cells from advanced disease patients, than the newly diagnosed cases. The researchers also found that FL118 enhanced the effect of melphalan and bortezomib - two drugs commonly used in the treatment of multiple myeloma. When tested in a mouse model of multiple myeloma, FL118 was able to reduce tumour volume to almost one sixth of its original size and delayed tumour growth for up to 5 weeks.

According to the researchers, FL118 could be used in combination with currently used drugs to overcome treatment resistance. They suggest that FL118 has the potential to be highly efficient in relapsed or treatment resistant patients - a group that urgently needs new therapeutic options.

Dr Tuna Mutis explained the next steps: "The first step towards using this compound in the clinic is to do a phase one trial, which judges the safety of the drug. Our collaborators, who also provided this compound, are now planning this trial. In addition to this, we are also testing whether this new drug could improve immune therapy. This would be another important effect, which could demonstrate its usefulness in a wide variety of cancers - not just multiple myeloma."

Dr Helen Rippon, Chief Executive of Worldwide Cancer Research, said: "This study is close to our heart as Worldwide Cancer Research's founder, Dr Colin Thomson, sadly passed away from multiple myeloma. The new findings take the first step towards a new drug that could one day be used to treat people with advanced multiple myeloma. As with any new treatment, there is a long journey ahead, but research such as this lays the groundwork for clinical trials in the future. Multiple myeloma is an incurable cancer that almost always comes back - even after seemingly successful treatment. Treatment resistance is a huge problem in cancer patients and exciting discovery research like this tackles this issue head on. We need to make sure that more bold new ideas like this are funded if we want to keep one step ahead of cancer." 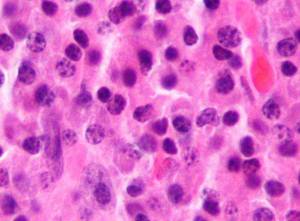 Boosting Awareness of GI Cancers: Focus on Colorectal and Liver Carcinomas
UP NEXT...
Investigating a Potential Serum Biomarker for Lung Cancer
CME