Aging is a process of gradual deterioration from exposure to time and the elements; this process begins with deterioration deep inside every cell. Researchers from Stanford University and the VA Palo Alto Health Care System (VAPAHCS) have identified a protein that guards cells against senescence—aging-related problems—by protecting a particularly vulnerable set of genes. The study is published in the July 13 issue of the Journal of Biological Chemistry.

The genes that encode components of the ribosome—the protein-making machine of the cell—are abundant and constantly in use. Most organisms, including humans, have many copies of ribosomal genes (collectively called ribosomal DNA, or rDNA), some of which are kept silent as backups in case the active copies of ribosomal genes are damaged. This is important because rDNA is essential but unstable—prone to mutation and rearrangement.

"Ribosomal DNA is one of the major hotspots for instability in the genome," said Silvana Paredes, the research scientist who led the study.

Working in Katrin Chua's laboratory, which is jointly affiliated with Stanford and the Geriatric Research Education and Clinical Center at the VAPAHCS, Paredes examined the relationship between aging, rDNA, and a protein called SIRT7. SIRT7 helps modify the proteins that DNA winds around, which affects whether genes are turned on or off. Paredes found that SIRT7 was important for keeping parts of the rDNA turned off.

This function turned out to be crucial for preventing aging-related deterioration in the cell. When SIRT7 was removed, the rDNA genes became damaged. The cells stopped dividing and exhibited other symptoms of damage and age. Such senescent cells accumulate in tissues in aging-related conditions as diverse as cancer, diabetes, heart disease, arthritis, and neurodegeneration; studies in mice have suggested that removing senescent cells can prevent some of these conditions. Identifying SIRT7 as a protein that keeps cells healthy could therefore lead to therapies that prevent cellular senescence.

"By identifying rDNA instability as an underlying trigger of senescence of human cells and demonstrating the central role of SIRT7 in protecting against this process, our studies not only provide important insights into basic mechanisms of aging, but also identify potential molecular targets for aging-related disease processes," Chua said. 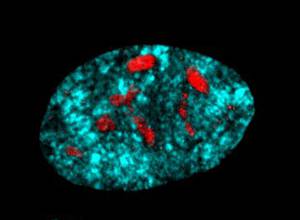