In January of this year, EPFL engineers announced in Advanced Science their concept of a novel cardiac assist device that is devoid of rigid metallic components. It consists of a soft, artificial muscle wrapped around the aorta that can constrict and dilate the vessel, ultimately enhancing the aorta’s natural function and aiding the heart to pump blood to the rest of the body.

Now, EPFL engineers led by Yves Perriard of the Laboratory of Integrated Actuators in collaboration with the University of Bern, have successfully implanted their first artificial tubular muscle, in vivo, in a pig. During the 4-hour long operation, their cardiac assist device maintained 24 000 pulsations, of which 1500 were activated artificially by the augmented aorta.

The feat has unlocked a remaining 8 million CHFs out of 12 from the Werner Siemens Foundation to develop artificial muscles more generally.

“We’ve just achieved a world-first, proof-of-concept by successfully implanting our cardiac device in a live pig,” explains Perriard. “We are thrilled to be able to pursue the next round of projects thanks to the support of the Werner Siemens Foundation.”

In late 2017, the engineers were promised a donation of 12 million CHF from the Werner Siemens Foundation to set up a Center for Artificial Muscles at EPFL, to be delivered based on scientific advances such as this latest proof-of-concept.

Current cardiac technology requires connecting the heart directly to a pump, which means invasive heart surgery. Moreover, traditional pumps use rigid mechanical systems involving a propeller to get the blood flowing, but that also destroy red blood cells, making it an unsustainable solution.

The novel cardiac device proposed by the EPFL engineers does not tamper directly with the heart, but with the aorta instead. The concept involves placing a dielectric elastomer actuator (DEA) – a polymer that transforms electric energy into mechanical work – around the aorta near the aortic valve. By applying an electric voltage across their device, the actuator artificially constricts and dilates the aorta, acting like a tubular muscle that imitates the natural function of the aorta.

“Our artificial aorta mimics the way blood vessels constrict and relax to move blood through the circulatory system. The difference is that the aorta’s natural action is passive due to blood pressure, whereas our device is controlled by an external voltage,” explains Yoan Civet of EPFL’s Laboratory of Integrated Actuators. “With the help of our artificial aorta, the heart uses less energy to circulate the same volume of blood.”

Civet continues, “Our DEA is not a stand-alone pump. The heart maintains the DEA’s function by providing arterial pressure, and in return, the DEA assists the heart, making it more efficient at pumping blood.”

Perriard elaborates, “Our device is minimally invasive in that we do not touch the heart directly. In principle, it also preserves red blood cells due to its lack of rigid metallic components, contrary to traditional methods.”

Many Challenges Still Ahead

Perriard and his team are excited about the success of their latest cardiac achievement but are also aware of the caveats.

For instance, the current version of their DEA placed on the aorta may have no metallic components, but it still contains plastic components that are rigid that are used for connecting the device to the aorta.

Also, the DEA should ideally be placed around the aorta but this has yet to be achieved. The engineers point out that they must find a solution that does not involve cutting the aorta to implant their device. “Perhaps the solution is to find a way to get the aorta to adhere to our device,” explains Perriard. 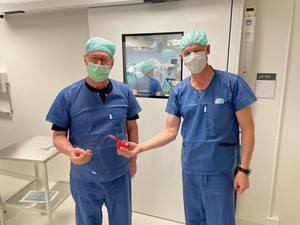 HER2-Directed ADCs in Breast Cancer
UP NEXT...
Evaluating Biomarkers at Work in NSCLC
CME