Hispanic and Black Americans have suffered higher rates of hospitalization and death from COVID-19 than white Americans. A new Penn State study analyzed data collected when COVID-19 vaccines first became available to determine whether these racial and ethnic disparities are related to vaccine hesitancy. Among their findings, the team discovered that disparities between Black and white adults in COVID-19 vaccine uptake may largely be due to anti-vaccine beliefs among Black adults. By contrast, the team found that U.S.-born Hispanic adults were less vaccine hesitant than U.S.-born white adults.

According to lead researcher Michelle Frisco, department head and professor of sociology and demography, previous research shows that Black adults are consistently more vaccine hesitant than white adults, while evidence is mixed about Hispanic-white disparities in vaccine hesitancy.

“We wanted to explore racial and ethnic disparities in COVID-19 vaccine hesitancy as vaccines were rolled out in the U.S., along with the underlying reasons for these disparities, so that we could determine if different public health messages are needed for different racial/ethnic groups.”

Frisco, who is also a Population Research Institute associate, and her research team analyzed nationally representative data from almost 2,000 adults who were part of a survey fielded by Elite Research during the first three months of 2021. The survey captured COVID-19 experiences including diagnosis, prevention behaviors, vaccine hesitancy, and whether participants had friends or family members who had contracted or died from COVID-19.

According to Frisco, this is the first nationally representative study to distinguish between U.S.-born and foreign-born Hispanic adults, groups that differ from each other on many factors that can influence vaccine hesitancy. Study results were published recently in the journal Social Science & Medicine.

“Existing findings about whether Hispanic adults in the U.S. were more or less vaccine hesitant than whites was murky and no previous national studies had looked at immigrants and U.S.-born Hispanics separately," said Frisco. "We thought that this was important, as we theorized that immigrants may be more vaccine hesitant than their U.S.-born peers for several reasons, including fear of being deported in a political climate where foreign-born adults were afraid of being labeled as 'public charges' if they received free vaccines.”

“Our study findings indicated that a primary reason that U.S.-born Hispanic adults were more receptive to vaccines than white adults was because this group was hit hard by COVID-19. Not only were U.S.-born Hispanic adults more likely to know people who suffered and died from COVID-19, but they appeared more likely to translate this experience into greater willingness to be vaccinated,” said Frisco.

The researchers’ findings about Black-white disparities in vaccine hesitancy were more consistent with their expectations. Black adults were more vaccine hesitant than U.S.-born white adults, and the researchers' study was the first to document that these differences were almost entirely due to anti-vaccine beliefs.

“Unfortunately, the legacy of racism in health care and medical research has had a lasting impact that has carried into COVID-19 vaccine hesitancy,” Frisco said.

Other researchers on the project are Jennifer Van Hook, Roy C. Buck Professor of Sociology and Demography and director of the Population Research Institute at Penn State; and former Penn State faculty member Kevin Thomas, professor of African and African Diaspora studies at the University of Texas-Austin. 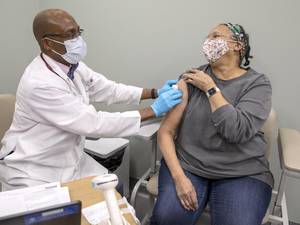